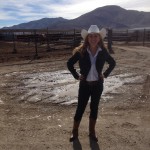 REAL co-founder Caryn Hartglass was asked by the owner of a feedlot in Yerington, Nevada to give a talk on climate change on March 8, 2014, to cattle ranchers on the eve before the annual bull sale. Part of a four-person panel including a climate change skeptic and an advocate of animal agriculture intensification, Caryn was the “Lone Vegan” and her talk was centered on the devastating effects animal agriculture has on climate change. Find out how she did in the upcoming documentary, PREACHING TO THE FIRE, opening June 10, 2014 at ResponsibleEatingAndLiving.com. PREACHING TO THE FIRE was produced completely in-house at Responsible Eating And Living. This new film by Hartglass and co-founder, Gary De Mattei, kicks off Responsible Eating And Living’s summer fundraising drive. Make your contribution to REAL today. Remember, it’s tax deductible.