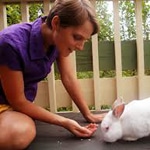 Angel Flinn is Director of Outreach for Gentle World – a non-profit educational organization whose core purpose is to help build a more peaceful society, by educating the public about the reasons for being vegan, the benefits of vegan living, and how to go about making the transition.