I got up very early to prerecord my radio show. I was interviewing Dr. Melanie Joy. She’s in Berlin, the station is in New York and I am in California. It’s amazing what we can do today with technology. Too bad we haven’t figured out how to make it the same time everywhere around the world! It’s nine hours later in Berlin so we began the interview at 7am PT. I was exhausted the rest of the day. It was a good opportunity to take the day off, until rehearsal in the evening.

Lunch: It was a beautiful sunny day and I wanted to sit in the sun. At first we thought we could drive over the hill to the beach. We stopped in Los Gatos for me to mail our 1096/1099 forms due to the IRS by tomorrow. Once we were there we decided to walk around a bit. Then Gary remembered a new restaurant we had seen the last time we were here, Golden Triangle Cuisine. I had checked them out and they had a vegetarian menu. This was the perfect time to check it out. The interior was very festive with lots of metallic accents from ceiling to floor. They also have outdoor seating and on such a beautiful day we took advantage of that. Gary ordered the Peanut Curry with Hominy, Potatoes, Carrots, White Onions and Tofu. 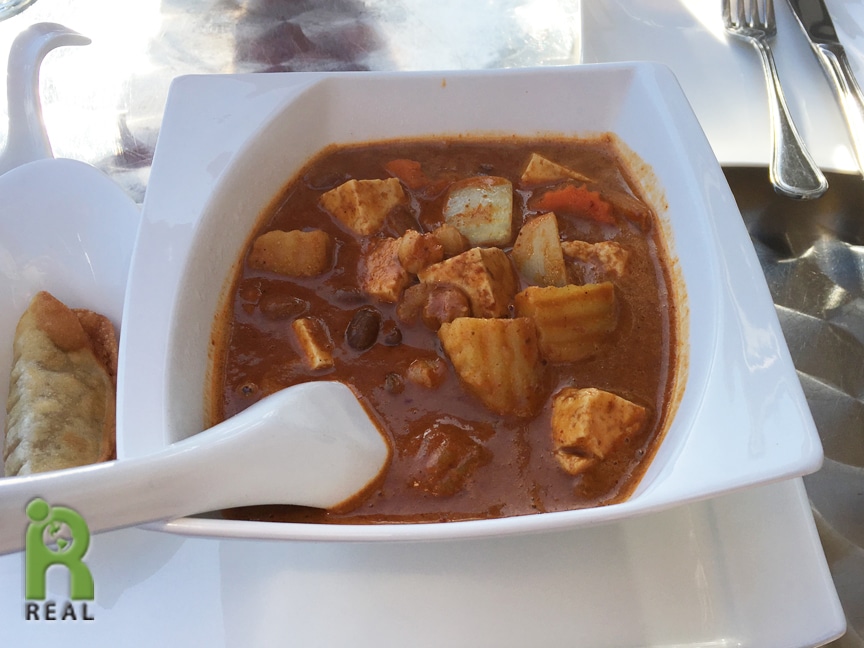 I had the Ginger Sautéed with Garlic, Green Onion, Wood Ear Mushrooms, and Vegetables. Both dishes came with Brown Rice and fried Wonton, which I didn’t eat since it was made with white flour. Gary ate my Wonton and said it was delicious. 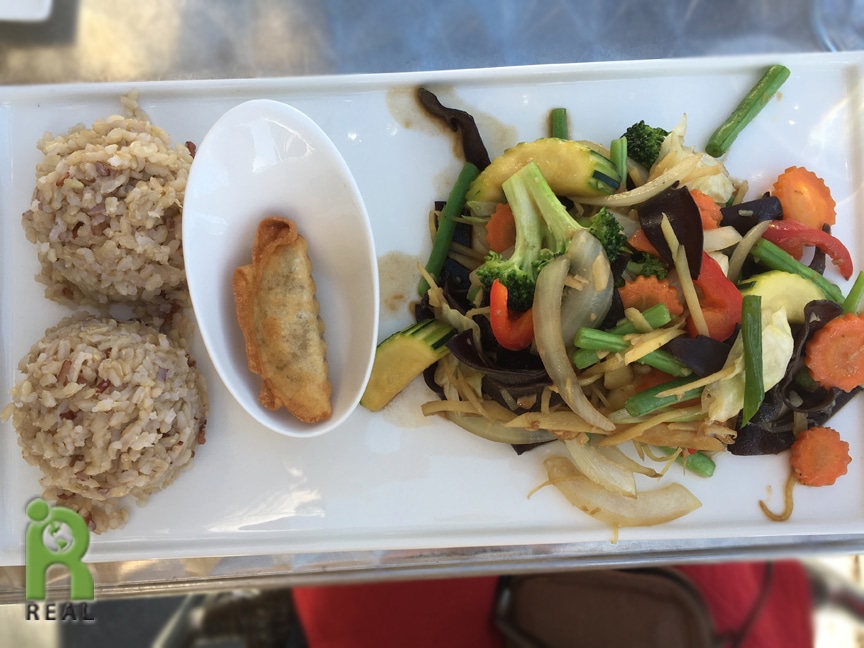 Tea Time: We never made it to the beach. Instead we stopped at Roy’s Station for tea and met Gary’s cousin Nancy. She brought a giant fresh Orange that we all shared. She reminded us that we should eat at the Crepe Bistro some time for gluten-free, vegan crepes. 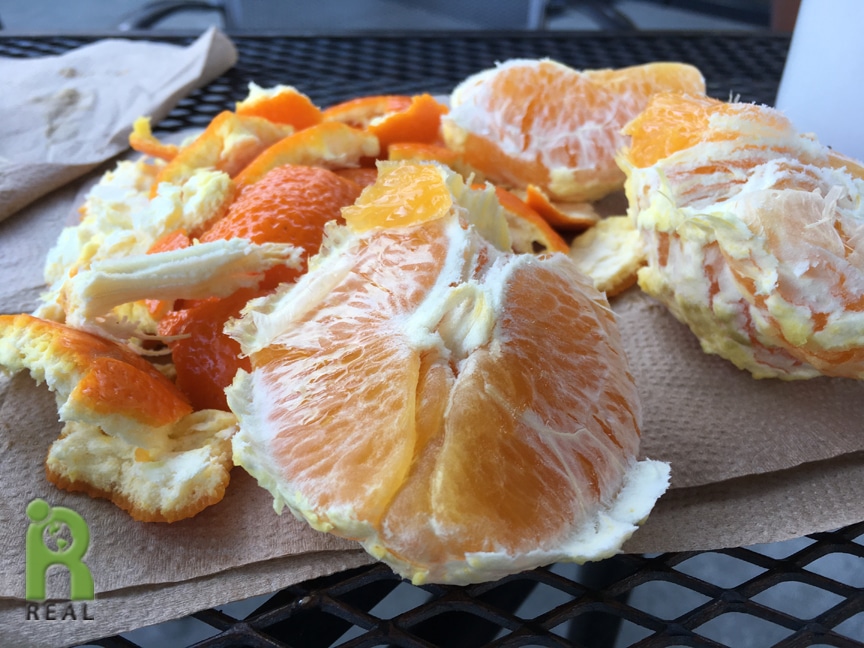 Dinner: Heading over to rehearsal I was felling hungry but Gary was okay. He wanted to stop and get me something but I said no. When we rolled into the parking lot one of the cast members called. Her father who is also in the cast was celebrating his 80th birthday with us at rehearsal. She was getting cupcakes. There are so many dietary concerns (nut-free, gluten-free and vegan) with the cast and she wanted everyone to have something. She was picking up a sweet crepe from Crepe Bistro in Santa Clara and wanted to know if certain ingredients were okay. This is the same Crepe Bistro that cousin Nancy was telling us to go to earlier in the day. I asked her if she could get me a savory crepe and she did! The universe felt my hunger and provided. She presented it to me during the rehearsal. Wow! 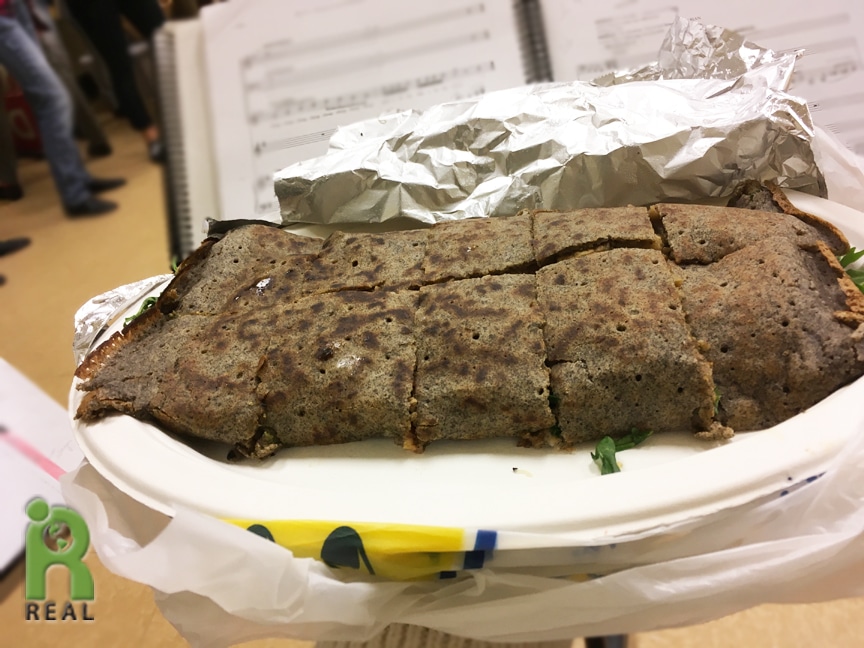 It was cut into ten pieces and I took one at time when I could between scenes. It had Roasted Eggplant, Tomatoes, Olives, Roasted Bell­ Peppers, Arugula and house­ made vegan Pesto. After 5 pieces I was done. 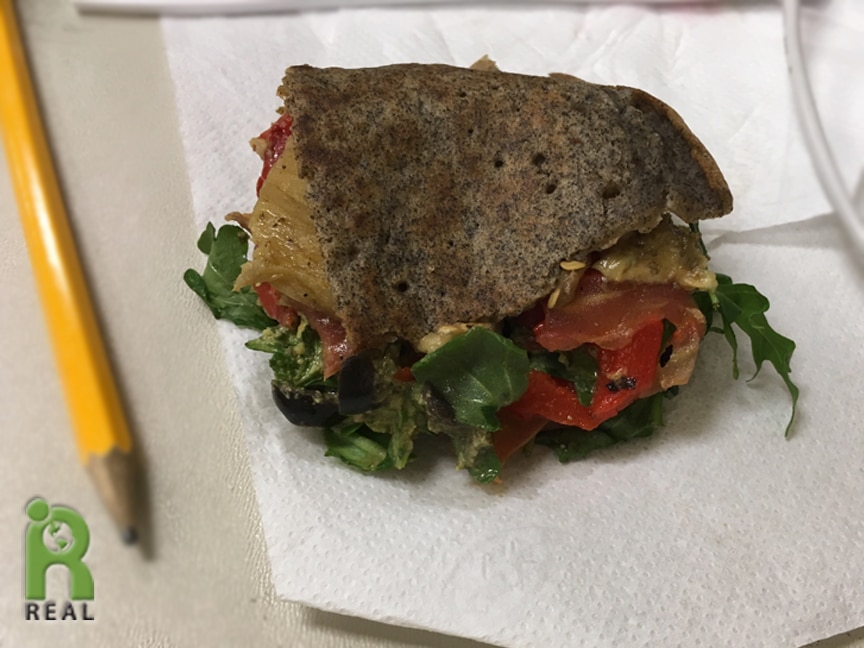 Evening:
At night after rehearsal, I finished up the Spinach Mushroom soup our co-producer Katie gave us. Gary had Oatmeal! I made some hot Lemon water and spiked it with a tiny splash of Hennessy Cognac. My friend Ann gave me a tiny minibar-sized bottle in December and there is still a lot left.