Breakfast: Janet and I were meeting for a walk in the park, Forest Park. I got up early (for me) and brewed some Green Tea and drank some and brought a bottle along with me for the walk.

Lunch: The walk from from my apartment to the park was about 45 minutes. Then we walked around the park for an hour and a half. When I was ready to head home Janet joined me. Janet had been looking to pick Mulberries but had not seen any trees in the park. We found them on the way home! Back at the apartment I sliced up an Orange, an Apple and a Peach and we refreshed after our morning’s event. 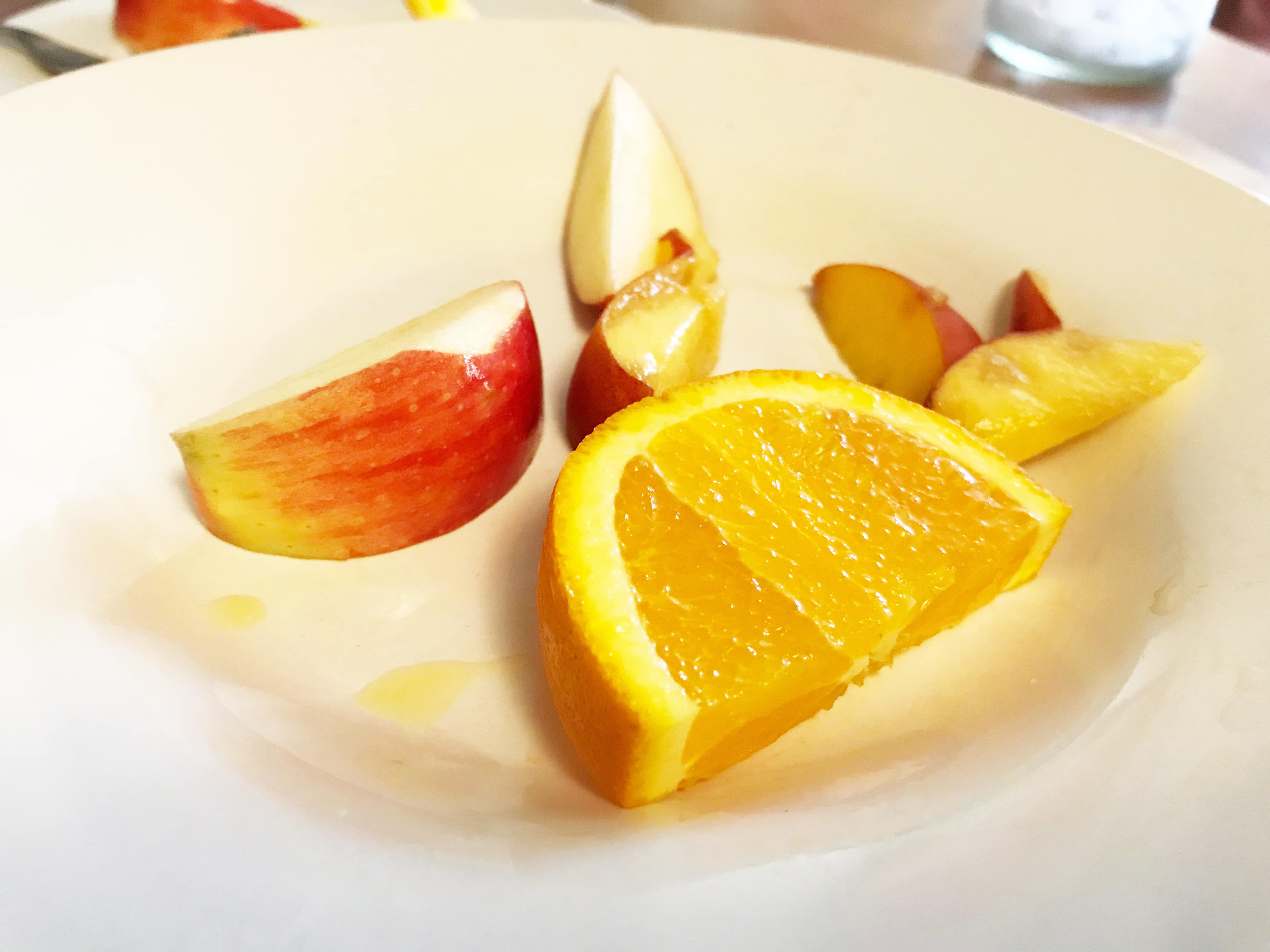 After she left I made a Green Salad with Red Bell Pepper Turmeric Dressing a dumped a ton of Nutritional Yeast and ground Flax Seed on top. 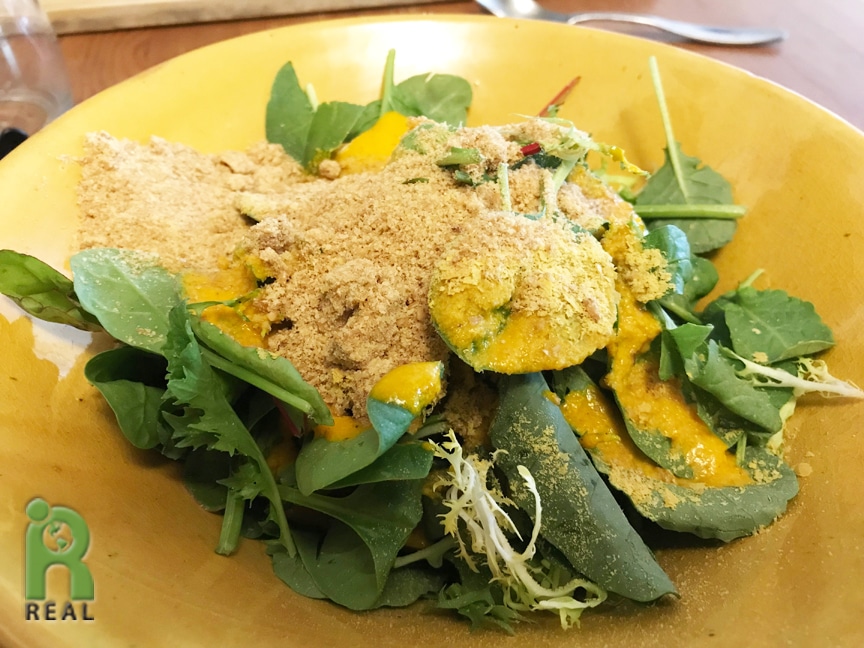 I warmed up the cooked herbed Whole Grain Blend. I was hungry. 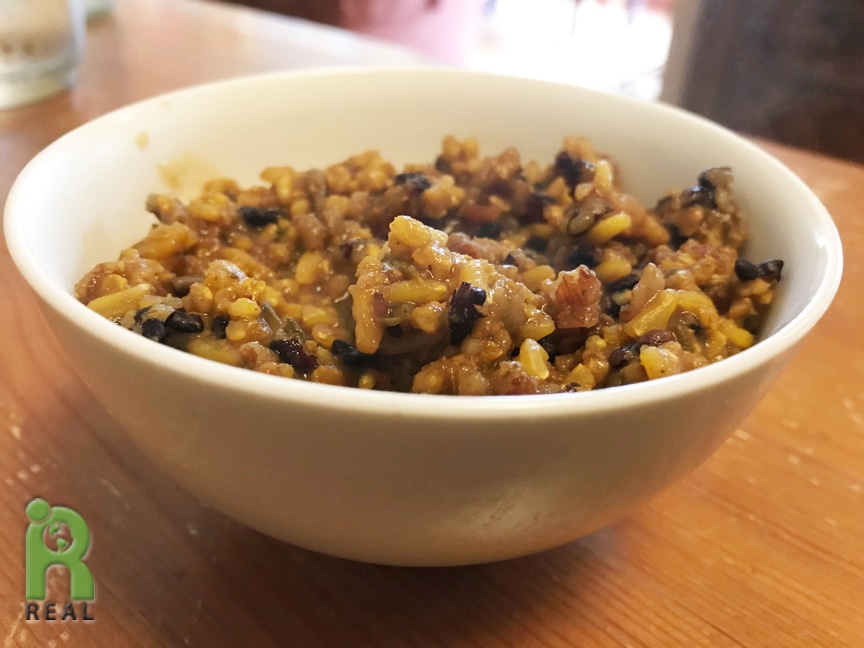 Dinner: This evening’s event was at Blossom on Columbus. I was the first to arrive and chose a seat at one of the outdoor tables. They were offering a free wine tasting event at 6:30pm with wines from an Israeli company. My friend Linda Long joined me and our plan was to stay afterwards for dinner. The first wine to be poured was a 2016 Rosé from Vitkin. It was pleasant but not what my palette was in the mood for. It seemed sweet although Linda was surprised when I said that because it didn’t seem that way to her. She liked it. 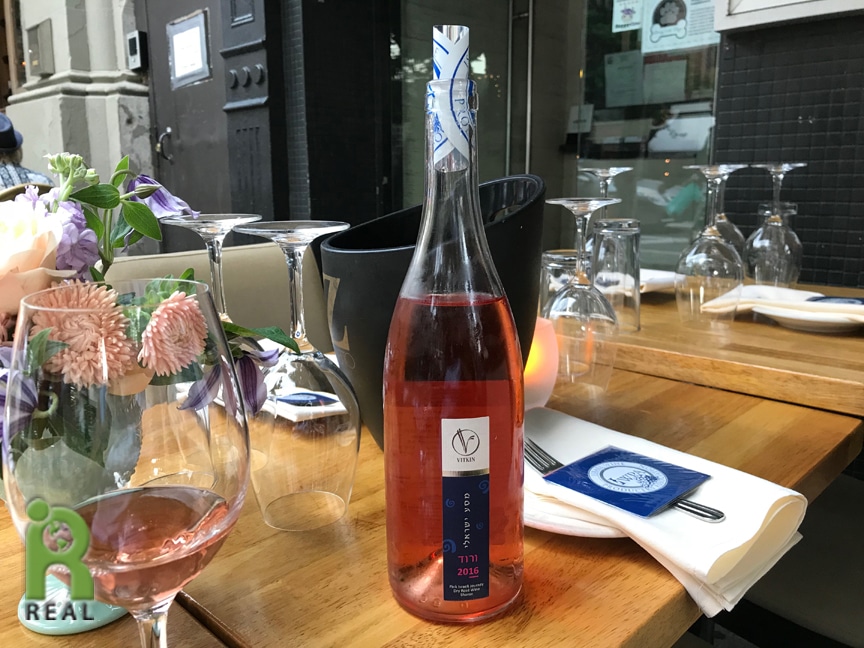 It was a wonderful surprise to be served appetizers. We had no idea they were coming and they were so good. Fig Bruschetta and Quinoa Sushi – both gorgeous and so yummy. 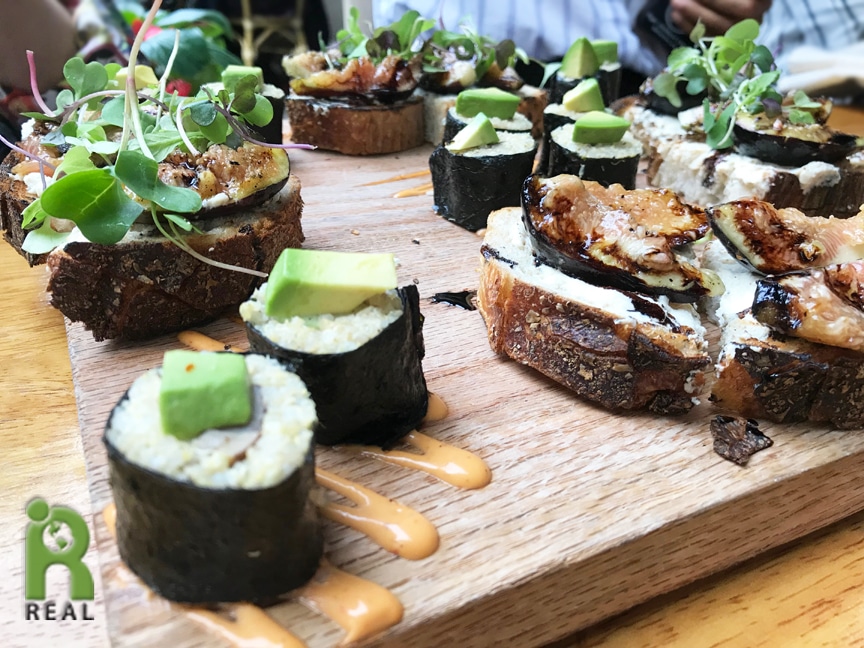 The next was the 2014 Chardonnay by Jezreel. We both liked this one. It was a good choice for summer outdoor dining. 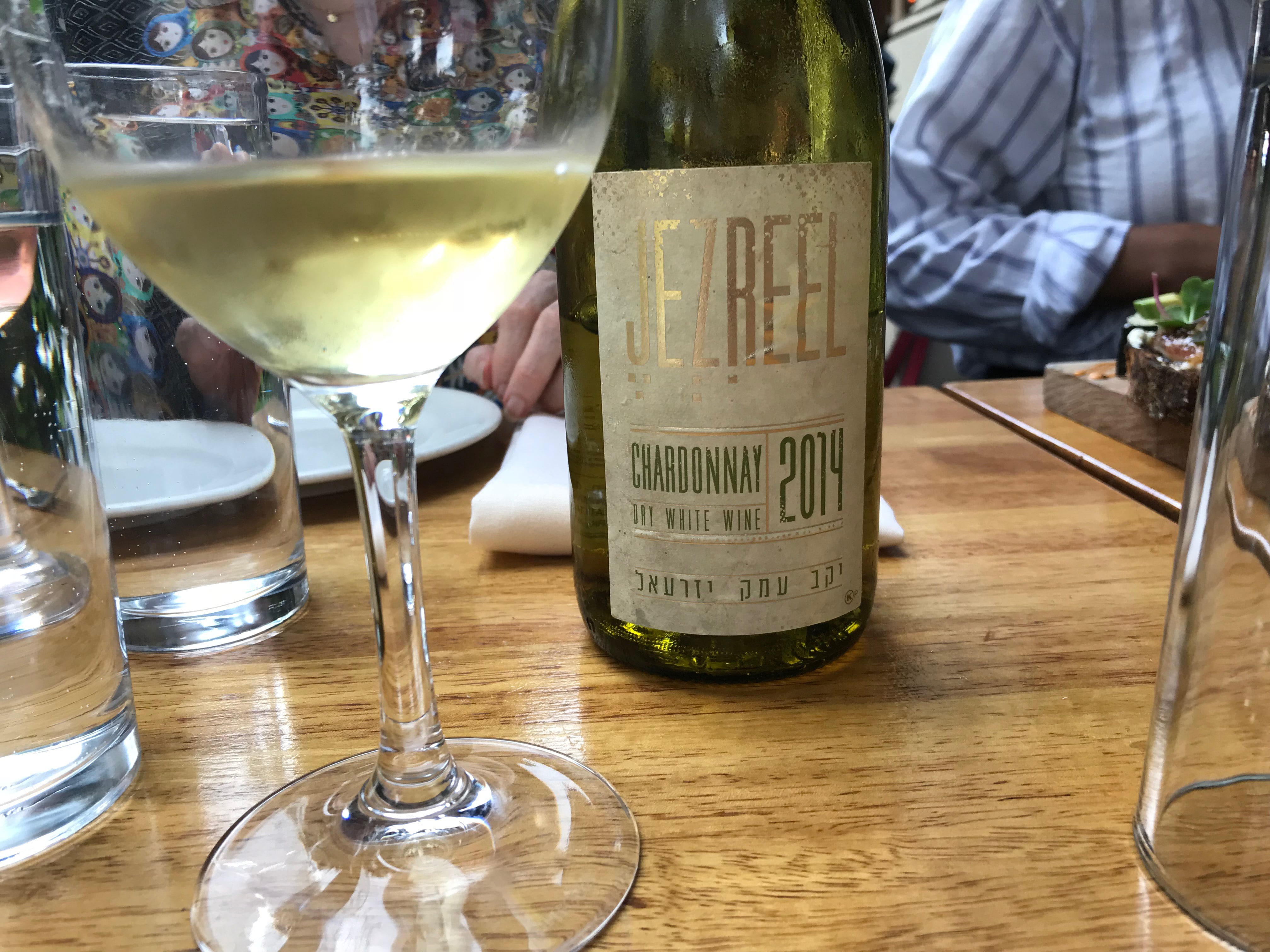 The wine kept flowing! I did my best to keep up. The Pinot Noir, a Napa Valley wine from Hagafen was next. I smiled to myself. I knew that word, Hagafen, הגפן the Hebrew word for vine. It’s also what many called the Jewish blessing over wine, the Hagafen. I was in the mood for a red wine and this was it. 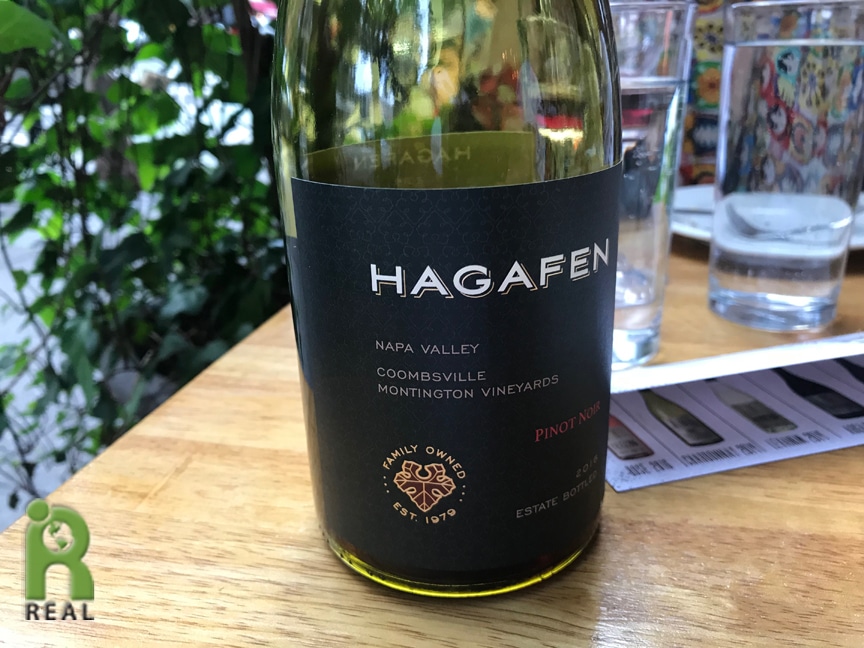 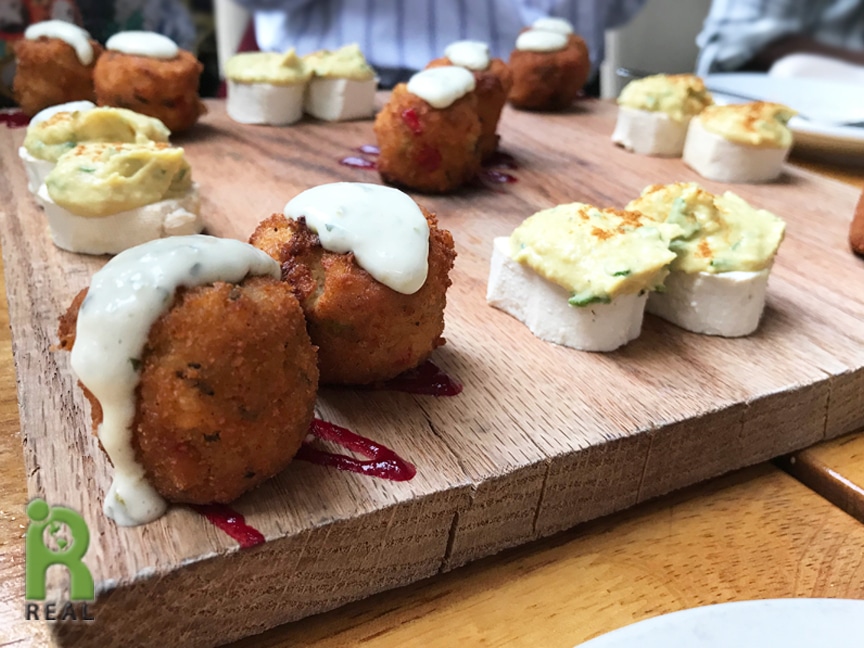 We were feeling good! It was a perfect evening. The Jezeel 2014 Syrah was poured next. I enjoyed it. It was clear to me I wanted a beefier, meatier wine and this was more like it. 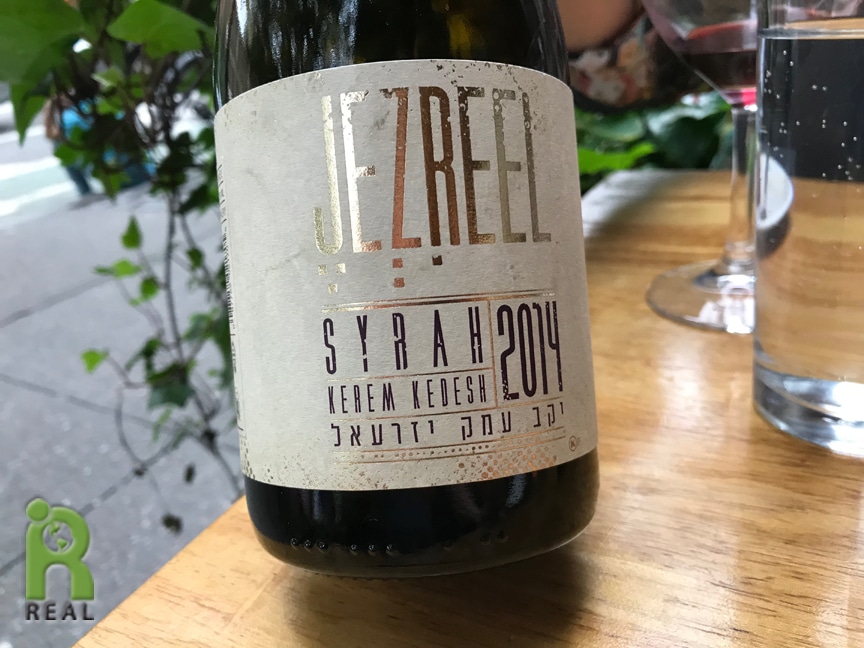 The service was outstanding. Linda reconnected with Michael who has worked at this Blossom and the one down in Chelsea before that. 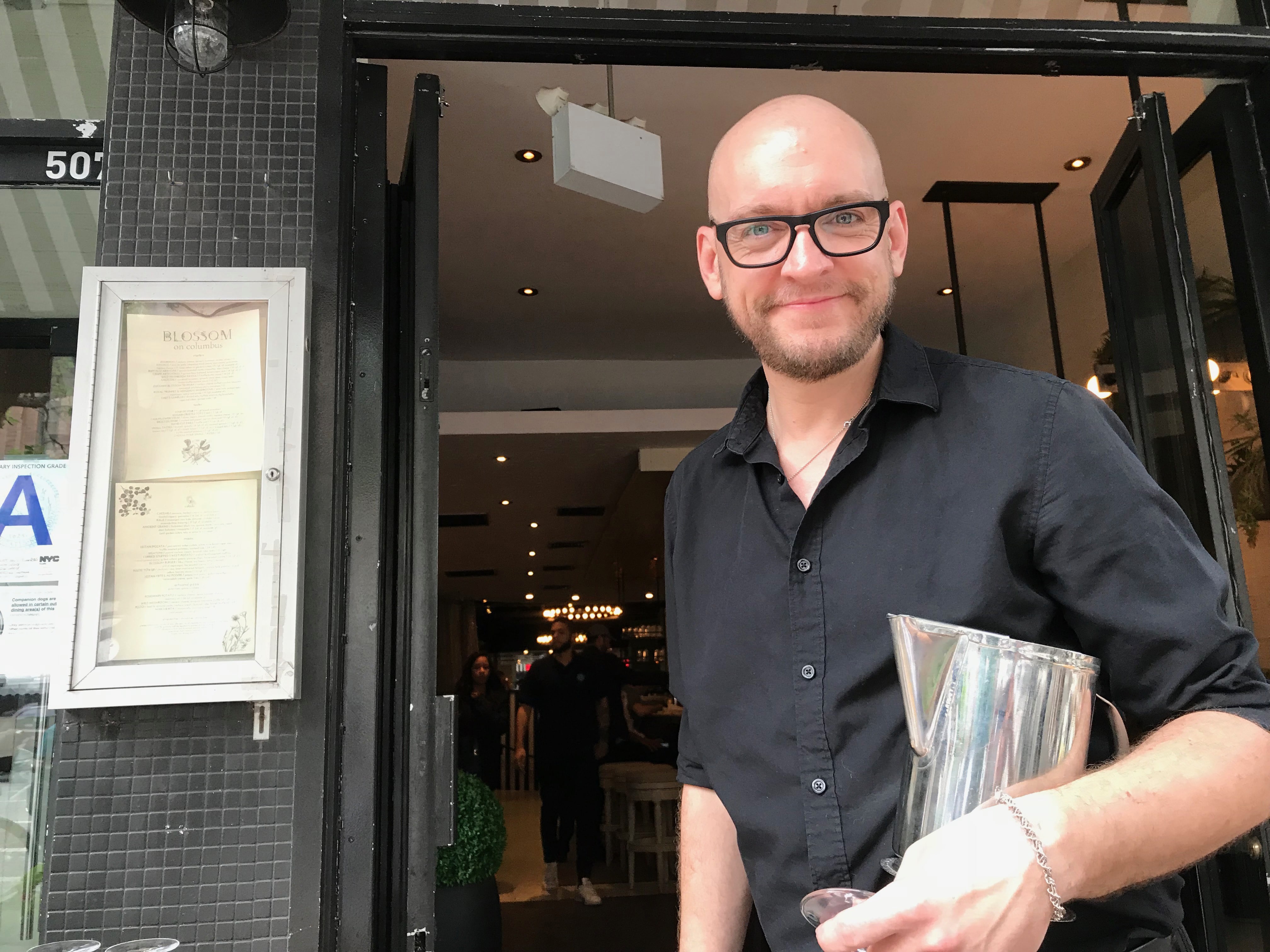 It was time for dinner. I ordered one of the specials, an Eggplant dish. When I heard it came with Escarole I had to get it. I love escarole and I rarely see it on any menu. The Eggplant has a Pine nut crust and was set in a Basil Cream Sauce. Yes, I am coming back and bringing Gary. I was sad he was not experiencing this magical evening. 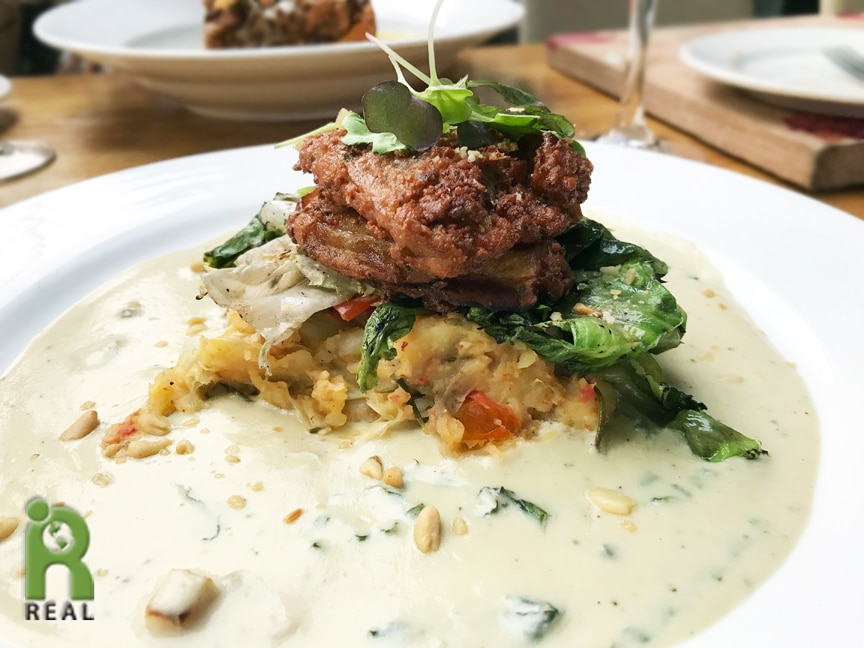 Linda went for the Curried Stuffed Sweet Potato. Her first remark with one taste was, “salty”. I laughed! I’m the one who always says that. We are both used to eating cleanly with little or no salt that restaurant food will often taste salty. But she settled in an enjoyed the dish made with a Walnut-Lentil-Eggplant Stuffing, Coconut Peanut Curry, grilled Collard Greens, Parsnip Chips and Horseradish Créme. 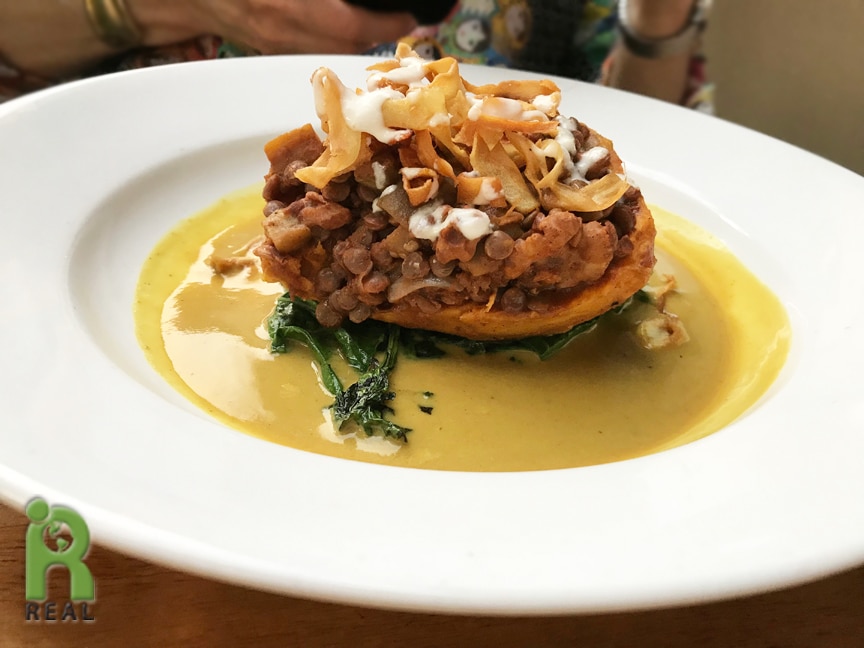 Quite sated but feeling fine, we decided to share the Tiramisu. We both went for the Chai Tea with Coconut Milk. 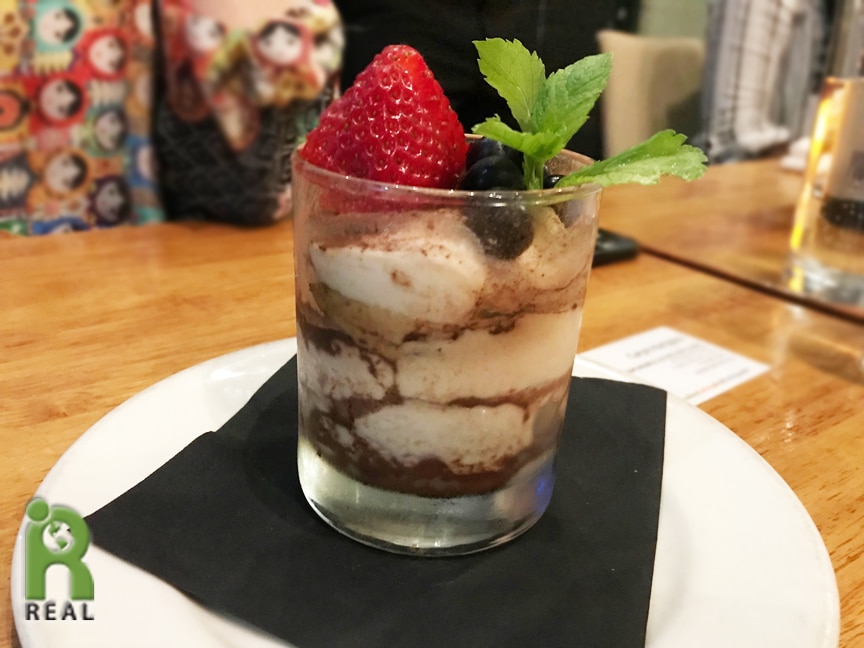 Gary’s been in San Jose for a few weeks. I will join him in a few days. He wrote to me what was on his menu:
Breakfast — I didn’t eat breakfast yesterday. I knew I had to get up early to get to CVS Pharmacy to pick up a prescription for my dad. After walking into the “drug store” at around 8:50 I had some time to walk up and down the aisles because the pharmacy didn’t open till 9:00 AM. I saw lots candy, cookies, donuts, Sara Lee cakes, packaged and processed foods like spam, chips, frozen hot pockets, frozen pizza, gallons of milk, cheese, eggs, lunch meats, and soft drinks, and then the big “Wellness Center” sign at the back of the store. I chewed on that for breakfast. 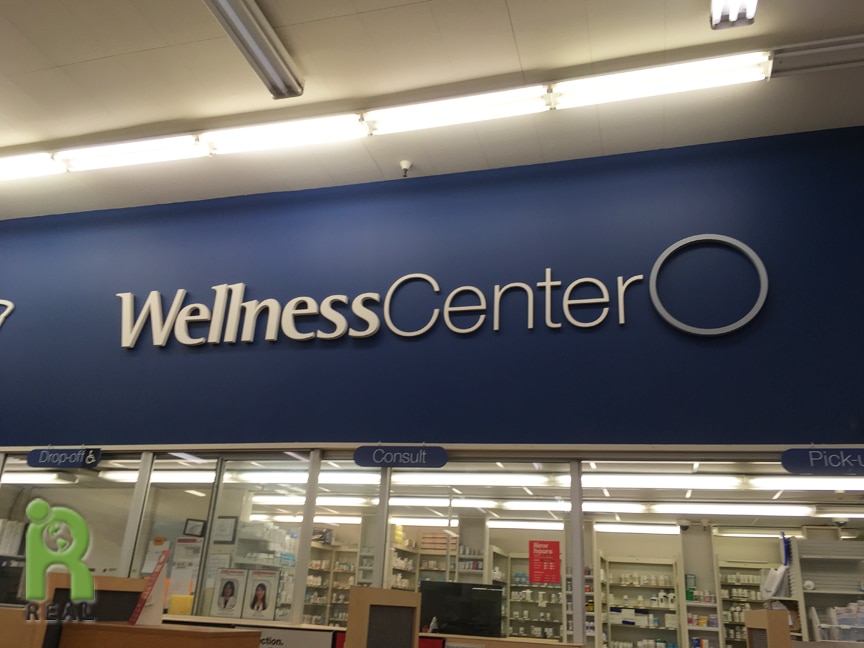 Lunch — I had a salad of Baby Kale, leftover Brown Rice, half an Avocado, and a box of Garbanzo Beans, tossed in a Lemon Tahini Dressing. 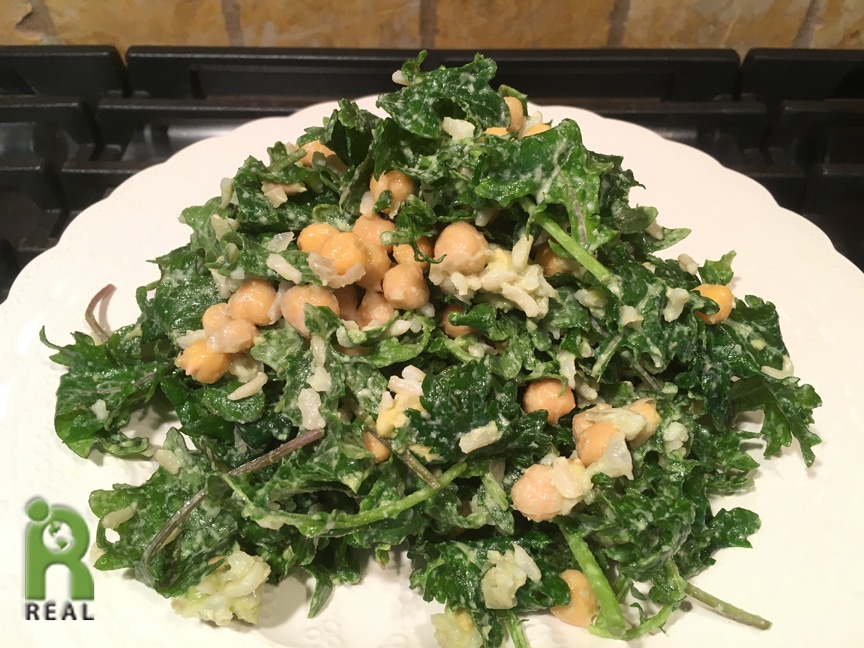 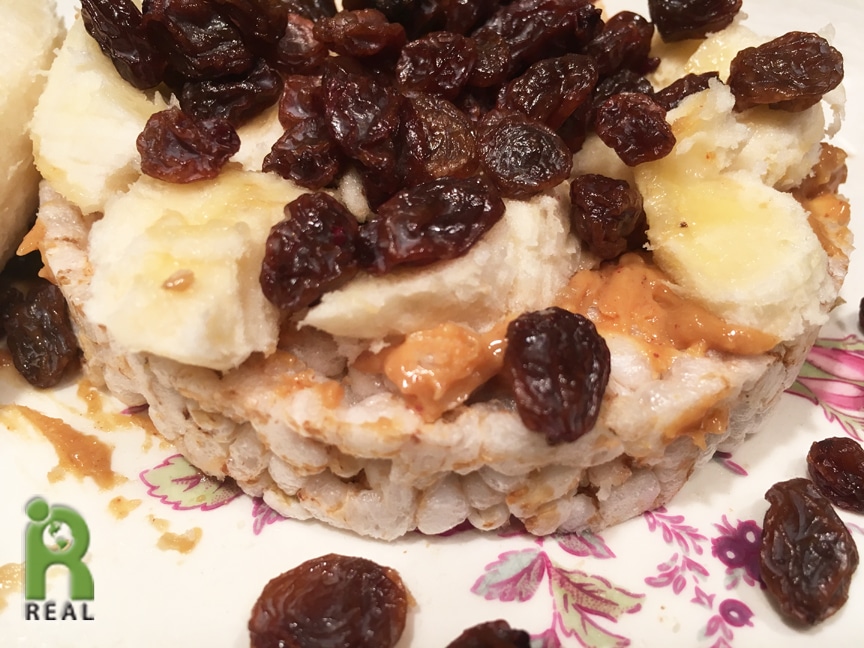