First Meal: I had set out a jar of frozen green juice to defrost yesterday and we never had it. I left it in the refrigerator. Gary blended it with frozen, organic Strawberries for a tart morning treat that we had with reheated cooked organic Oatmeal. 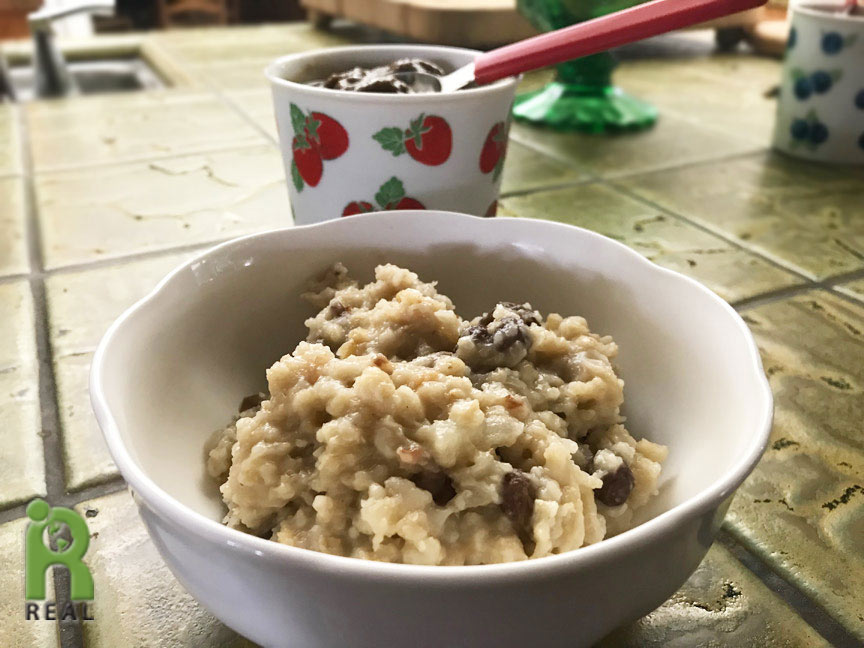 Snack: Yesterday was Gary’s dad’s funeral and today we were going to the memorial for Connie, a 39-year-old woman we have worked with at Playful People Productions who died suddenly in her sleep, leaving her two young children behind. I grabbed a couple of organic Bananas as we were leaving the house to sustain us. 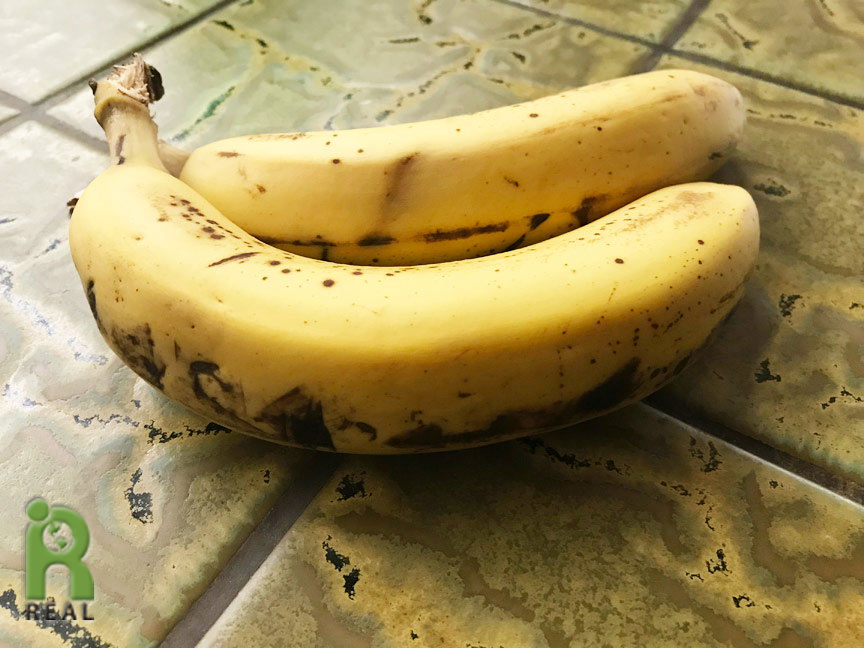 Second Meal: After a tearful, musical memorial there was a potluck. After many hugs, I took a plate of Tabouli Salad and Quinoa Salad. 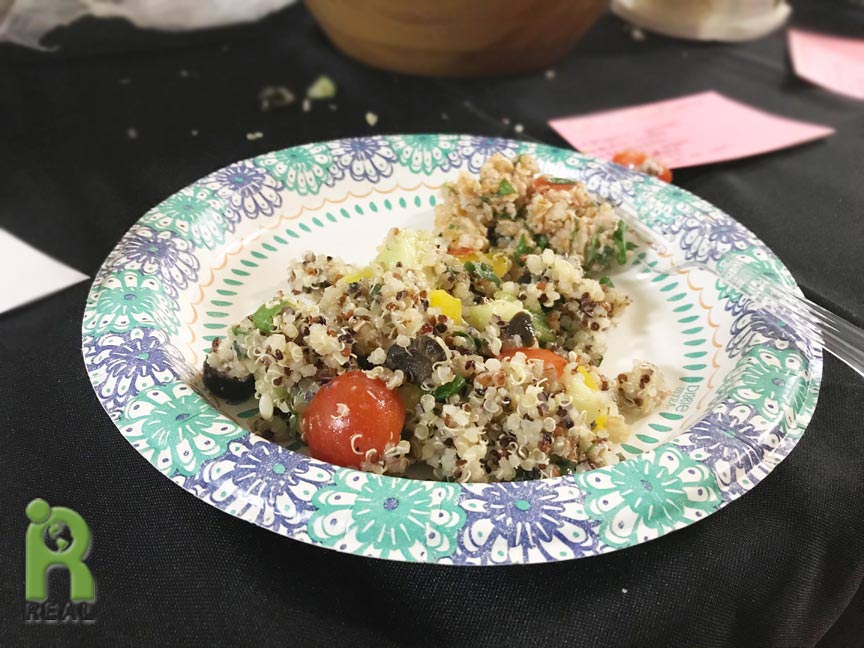 Third Meal: We had made plans weeks ago to meet our friends Larry and Ann Wheat at the Millennium Restaurant. The last time we saw them was almost two years ago. Gary had not eaten at the memorial and we were both hungry. We drove up to Oakland and arrived very hungry and one hour early. We took a walk in the chilly air and went into a Safeway. We bought some Pecans and Walnuts to hold us over. The restaurant opened a half hour before our meeting time. We went in and sat at the bar and ordered a couple of starters, one was the Ras El Hanout Marinated Olives 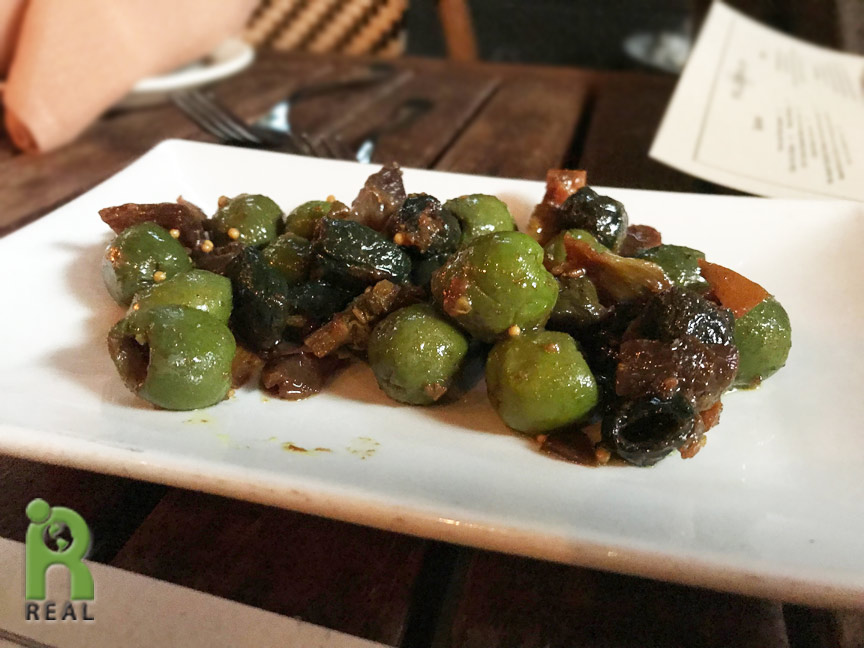 Pistachio Stuffed Dates was the other plate. These were amazing! 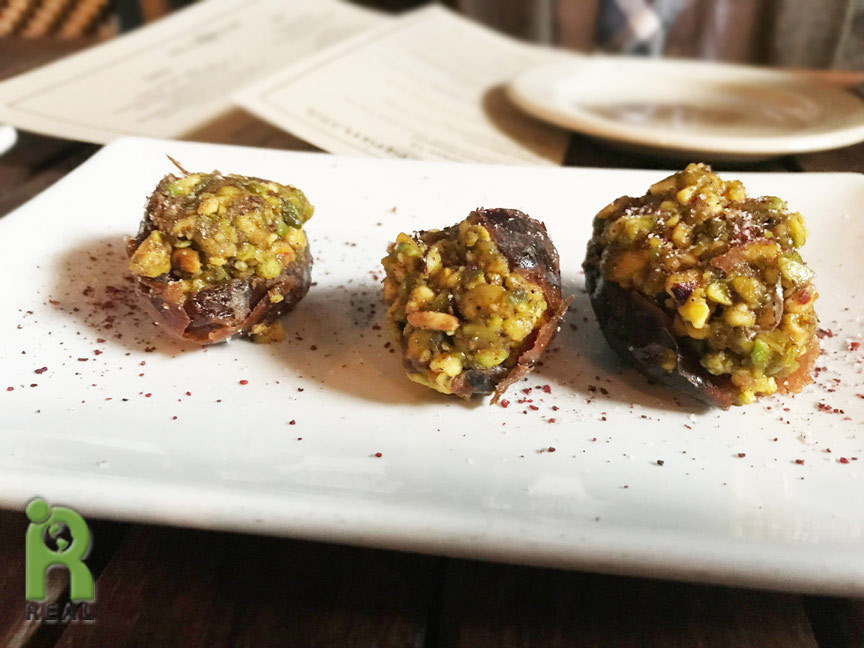 Ann and Larry arrived a little early too and we sat down at their regular table. They were the owners of the original Millennium Restaurant in San Francisco before it moved to Oakland. They are V.I.P.s. and we were lucky to be their guests. Larry wanted to try the Taste of Millennium. It was for the entire table and consisted of five courses plus we were offered a bonus course.
We began with the Warm Purple Potato and Chioggia Beet Salad with grilled King Trumpet Mushrooms, Pickled Onions, Shaved Watermelon Daikon, Creamy Chile Cumari Dressing and Nasturtium Green Pesto. If you know anything about Chef Eric Tucker and his work, his dishes have many ingredients, often ones you wouldn’t think of pairing. His flavors have depth. I loved the potatoes. It was dark and I had no idea they were purple. Maybe that’s why I liked them so much. 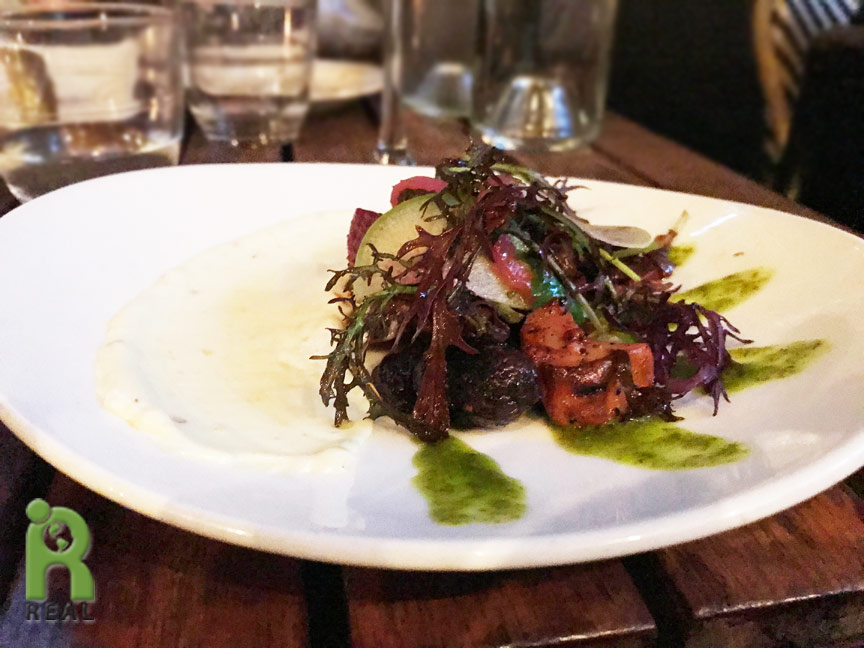 The second course was a Parsnip-Sunchoke Griddle Cake with smoked Sweet Soy Glazed Beech and Enoki Mushrooms, Miso Braised Leeks, Cashew Butter, Asian Pear and Shungiku Salad, and Carrot and Cabbage Kimchi. The thinly sliced Pears were a refreshing sweet touch with the savory flavors. Gary, who is not a fan of mushrooms, was a hungry trooper. He cleaned his plate. 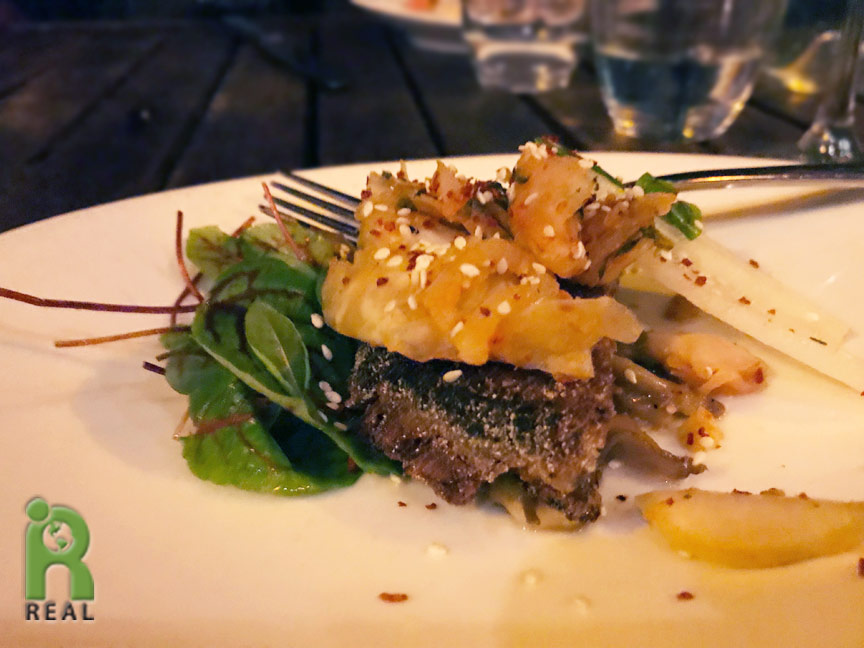 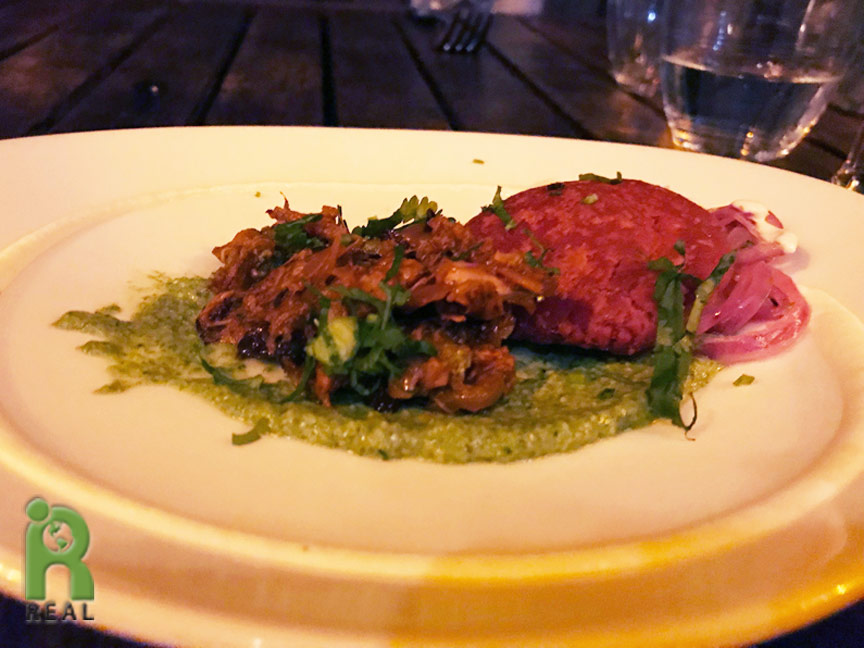 By this time we were filling up. It was announced that our first entrée was the Butternut Squash Korma. First entrée? It had Fava Green Roasted Cauliflower, Potato and Cashew Kofta, Butternut Squash Curry, Snap Peas, Gold Cauliflower, Coconut Raita, Tamarind Chutney, Cucumber Mint Salad, Coconut-dried Cherry Flatbread. Apparently, I forgot to photograph this one. Afterwards, we were given a palate cleanser of Pomegranate Confit. 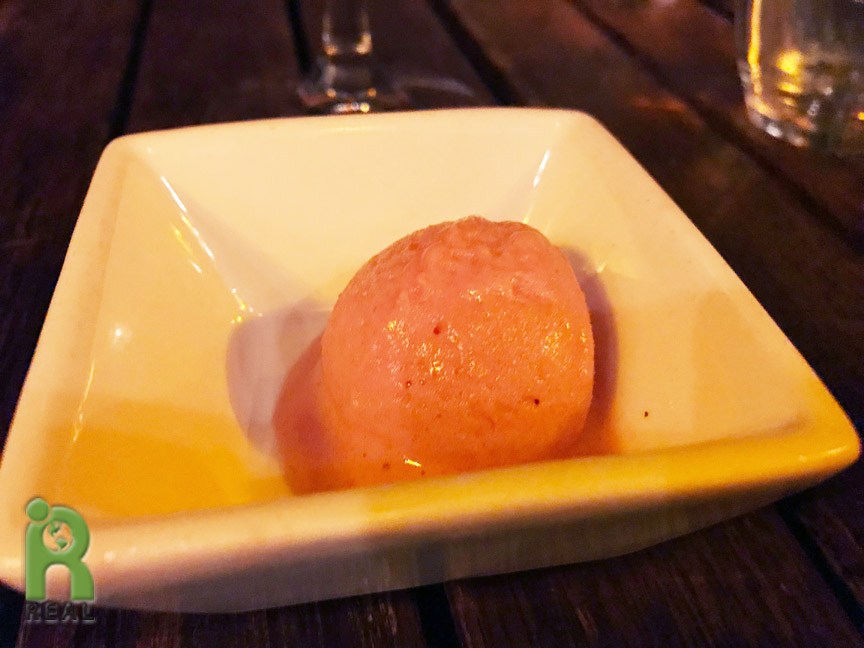 The second main offering was a Brick Pastry Purse: Black Truffle Cheese, Roasted Celery Root Filling, Black Barley Farrotto, Black Chanterelle and Hedgehog Mushrooms, Cashew Cream, Roasted Fennel and Escarole, Beet-Red Wine Syrup and Black Olive Herb Oil. This was my favorite of the savory dishes. I loved the mushroom and barley flavors in the farrotto, a creamy risotto-like dish made with farro instead of rice. The roasted celery root filling was so flavorful. 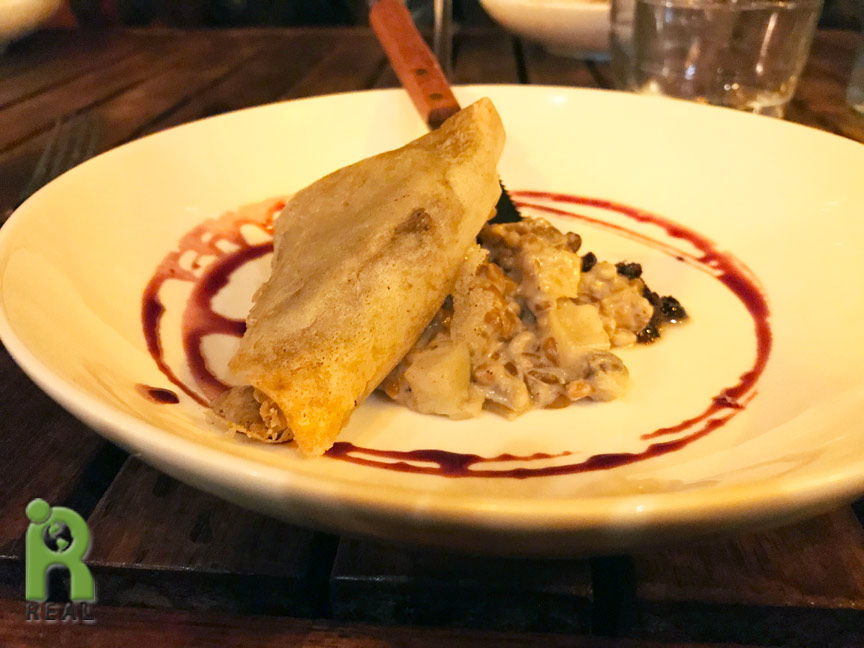 There was no room for dessert but we took a few deep breathes and found some. There was the Bergamot Chiffon Tartlet: Pâté Sucrée, Meyer Lemon Cream, Mandarinquat Preserves, Marigold Anglaise, Earl Grey Ice Cream and Candied Meyer Lemon.

Then there was the Chocolate Mousse Layer Cake, White Chocolate Anglaise, Chocolate-Chili Syrup, Chocolate Sea Salt Bark, White Chocolate Cocoa Nib Crumble, Espresso Almond Ice Cream. We attempted to divided the different treats on the plate evenly into four. Everything was so good. I think we liked the desserts best. Gary ordered a Mint tea and I had Chocolate Pu’erh Tea to finish the meal. 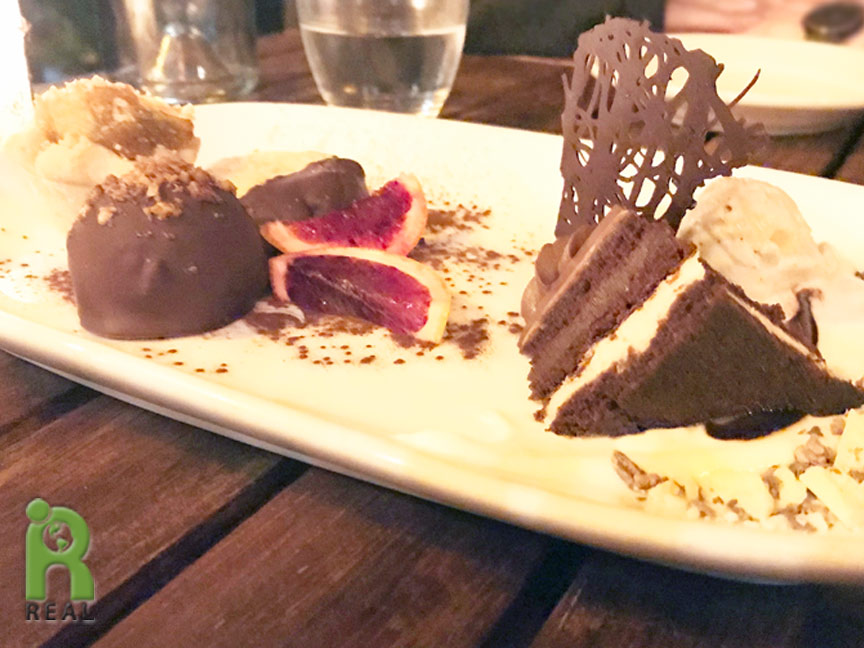 I had asked if we could get a copy of the menu we had this evening. It was impossible to know or remember everything we had devoured since there were many dishes and many more ingredients. At the end of the meal we were given this menu. 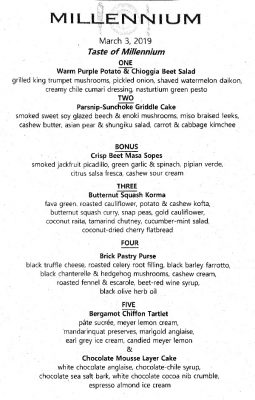 The dinner lasted three hours. There was sufficient space between each course to savor the flavors as well as the conversation. It was a perfect evening. Thank you Ann and Larry!