Breakfast: It was one of those days. You know what I mean. When you are so tired and nothing seems to go right for you. As I explained in yesterday’s post, I was in the Chicago area for a memorial service along with my friend Lorraine from Texas. We left the hotel at about 3:45 am to catch early flights home. I dropped Lorraine off for her 5am flight and returned the rental car. When I went to the ticketing area for my 5:55am flight on Spirit I saw the line at Security. It was miles long with a gazillion people. I thought I was there early enough, but after an hour waiting on line I ran to my gate and it was closed. I missed my flight. A few other people had missed it too including 2 women from the Chicago area who were going to spend a long weekend in the Big Apple. We all got reassigned to fly later that day to Myrtle Beach, South Carolina, wait there a few hours and then finally fly to Laguardia Airport back home. How exciting! I had never been to the Myrtle Beach airport. I was hungry. There was one restaurant in the terminal where I was. It was called Nacho Hippo. I really didn’t want to leave and have to come back through security to see if there were better choices so I got myself a table. The two women I had met earlier at Chicago O’Hare who missed the same flight were sitting next to me and invited me to join them at their table. They began by ordering coffee with Bailey’s and a Skinny Margarita. One asked me not to judge them for drinking early in the morning, it was not something they did regularly. And then I said to them, “Wait until you hear me talking to the server about what to order – you’ll find out I’m the crazy vegan!” And after a bunch of questions I ordered the Seasoned Black Beans, Roasted Vegetables and Corn. Once the gate was opened about being vegan we had a lively discussion about food. One of them knew Karyn Calabrese who I interviewed a few years back and who owns two vegan restaurants in Chicago. Small world. 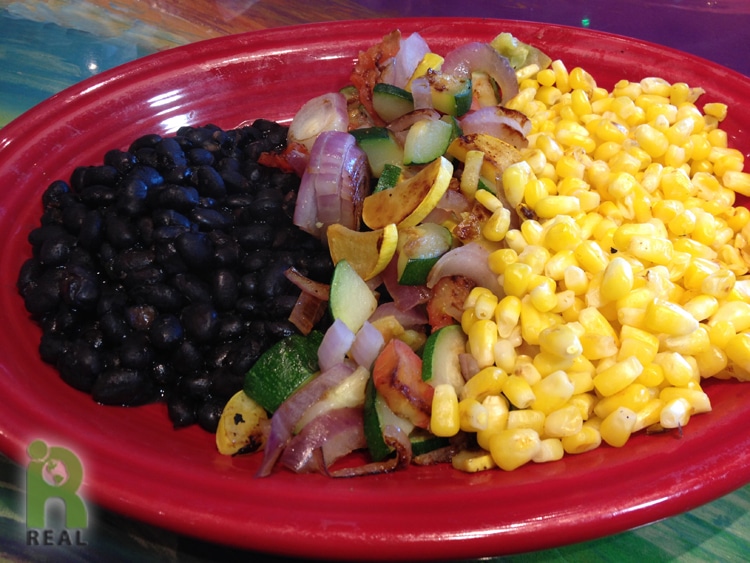 Lunch: I was happy to discover in my bag that I still had one apple and one pear that I had brought from home and had not eaten. This was lunch. Plus, still waiting at the Myrtle Beach Airport, I went to the Steak N Shake to see about getting a tea. I asked if they had soy milk and they said yes! I was elated and jumping up and down. I ordered a large black tea and one of the servers opened a small container of Silk soy milk just for me.

Dinner: It seemed like forever but I finally arrived home. Gary had prepared a lovely meal for me – Baked Potato, Steamed Collard Greens and Onions to go along with a special casserole he made with some unusual leftovers – Chinese Broccoli, Brown RIce and Creamy Carrot Bisque. He also defrosted my Daily Green Juice made with Kale, Carrots, Celery, Lemon, Lime. 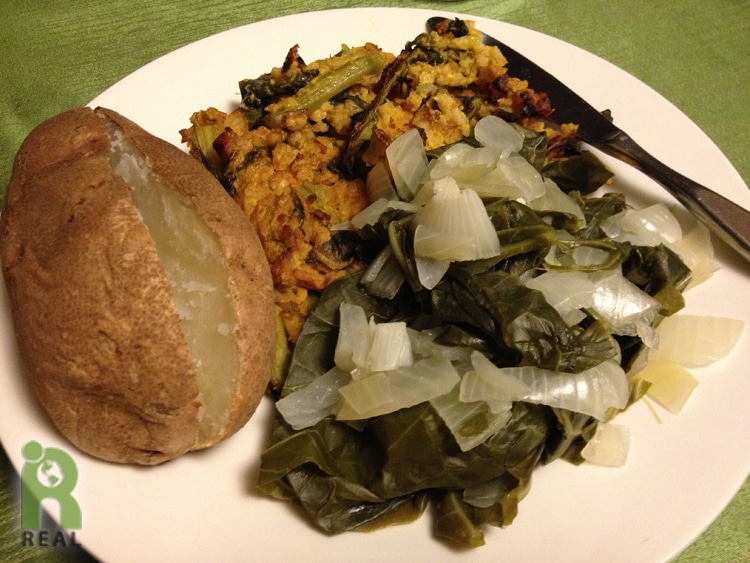