Breakfast: I had a cup of Earl Grey tea with soy milk and got straight to work because I had an exceptionally long “to-do” list. My MacBook Pro Early 2011 model has been problematic since August. I’ve been going to Tekserve in Manhattan 4 or 5 times since then for repairs. Fortunately, since the problem is related to an issue that Apple has decided to cover, even after the warranty expired my only costs have been time and frustration. I had planned to bring the computer back later in the day so I was trying to finish as much as I could. I do just about everything on this Mac and for many reasons, I am not ready to give it up and buy a new one. After my tea, I got to work.

Lunch: By lunchtime I was so hungry. Fortunately there was plenty of Mung Bean Chowder which I craved and leftover Kale Salad. I hummed to myself, “soup and salad, soup and salad, goes together like…” Wait, that song is “soup and sandwich”. Anyway it was all good and satisfied my hunger so I could get back to working. 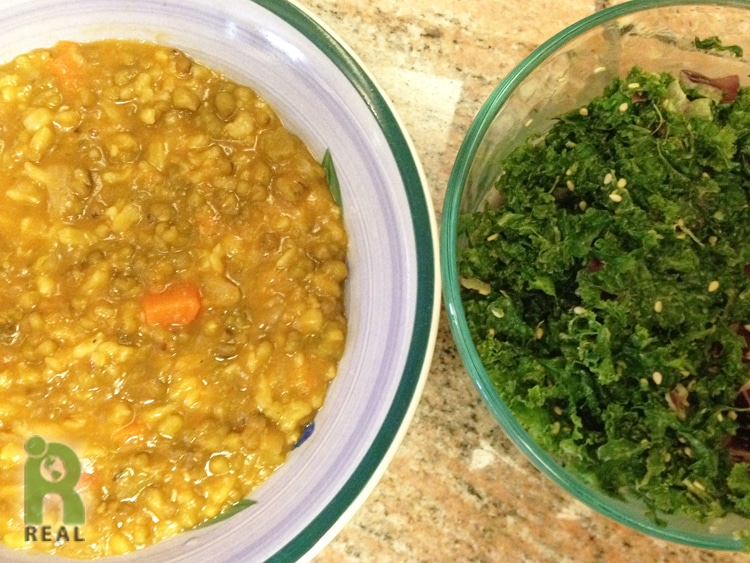 Snack: I spent an hour at Tekserve and it was decided that I should go to the source and get my Mac to a Genius Bar. I made an appointment for the next day. Fortunately my computer is working. Two times earlier this week the video was doing weird things and I want to take care of the problem before it is too late. It was convenient to be at Tekserve because I was signed up for a free course on Google Analytics, complete with free snacks, beer and wine! We use Google Analytics here at Responsible Eating And Living but it is not being used in the best way to benefit the organization. I did not go for the snacks but of course I will report on them here. It was the standard fare of chips: yellow and blue corn varieties and potato along with pretzels and the store-bought dips, guacamole with nasty preservatives, simple hummus from Fairway (which I sampled), a salsa and some cheesy thing in a jar. There was wine, beer and bottled water. I grabbed a Stella Artois and a water. I don’t like drinking bottled water, especially in plastic but I was very thirsty. Normally I bring my own, but I had not thought of doing that this time. The class itself was very basic, but I got one or two pointers from it that I plan on utilizing. After the class I met up with Gary who had been rehearsing and we stopped in to Trader Joe’s for some fruit, tofu and tempeh. We don’t shop there as much anymore because we don’t like the company, but it was right around the corner from where we were.

Dinner: We were again really hungry when we got home and that delicious Mung Bean Chowder was waiting to be reheated. We munched on some peanuts until the soup as ready.
Evening: I made a pot of Mayan Cocoa Spice Tea. We have not had any in a long time. This tea contains Cocoa Shells, Cinnamon Bark, Roasted Chicory Root, Cardamom Seed, Cocoa Powder, Stevia Leaf, Ginger Root, Clove Bud, Black Pepper, Natural and Organic Flavors and Essential Oils. I prefer using bulk teas and we have a wooden box with a variety of tea bags in it that were either purchased or given or acquired one way or another over time. I took two tea bags of Cocoa Spice, opened them up, emptied the contents into the basket in my tea pot and poured boiling water over it. Prepared this way, I believe it was the best cup of Cocoa Spice tea I ever had especially served with soy milk.