Breakfast: Beth was off early in the morning to teach yoga across the road to the Airborne Arts Flying Trapeze retreat people. We planned on meeting afterwards to go to the beach. I began with some Hibiscus Tea and a piece of Miracle Fruit. Beth told me that after you eat this fruit, everything tastes sweet. 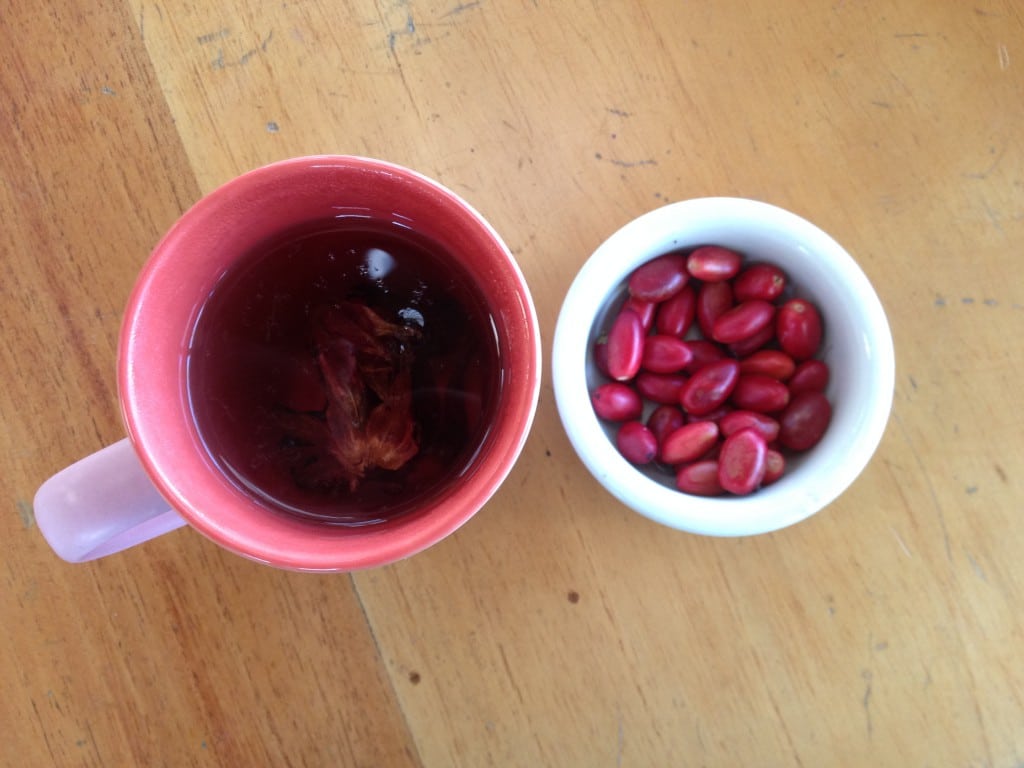 Afterwards I reheated the leftover Brown Rice with a Banana and some Oranges. 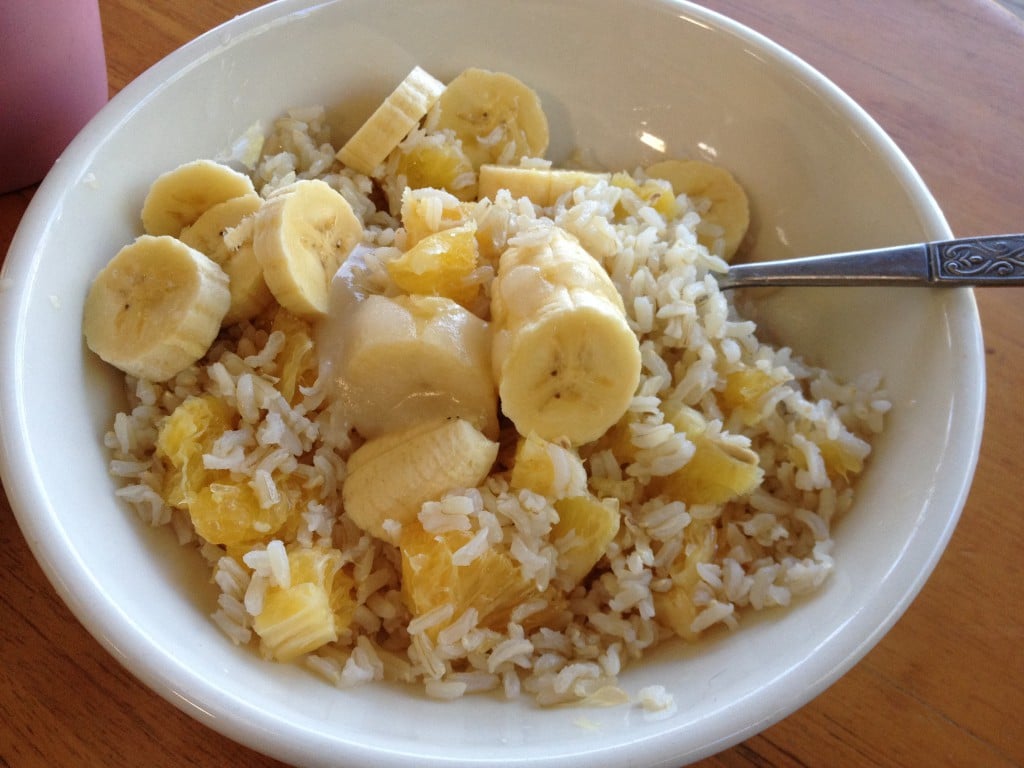 The oranges came from Beth’s farm. She had a lot of them that she said were old and did not know if they were good anymore, but I was welcome to try them. They were great! I was so surprised. After cutting away the hardened dry peel, the oranges were sweet and juice inside. When I leave an orange on the counter or even in the refrigerator long enough they get moldy. Why did these oranges not have mold? Perhaps the skin dried out enough not to mold, ultimately protecting the inside. 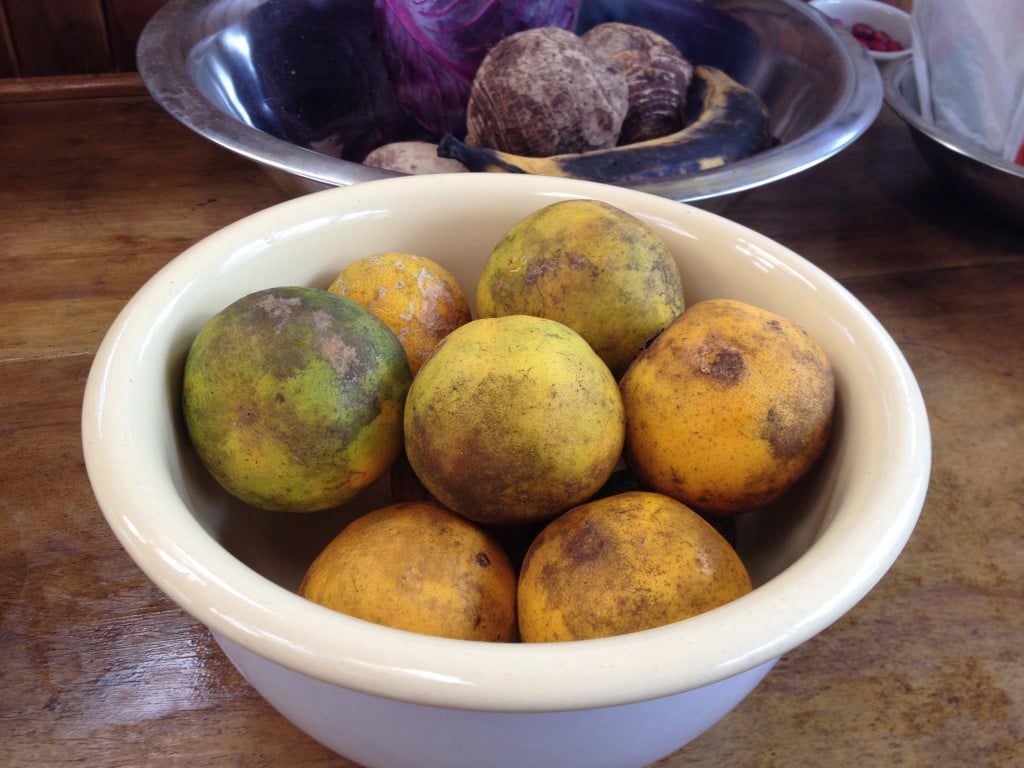 After breakfast I left the farm to meet Beth and the taxi. 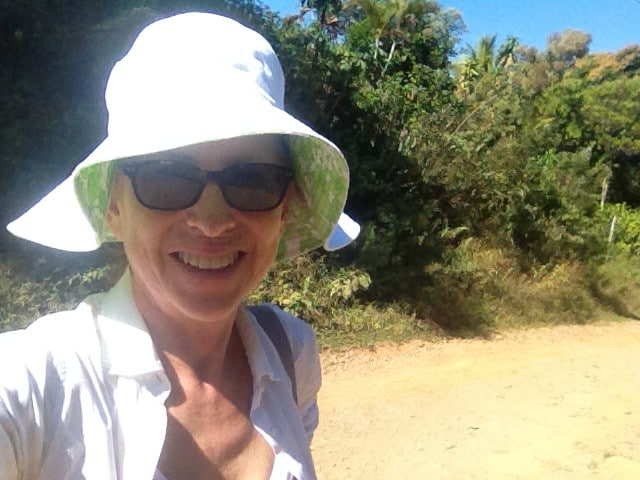 Lunch: Once we arrived at Playa Dominical we headed to Mama Toucan’s for vegan ice cream. It’s a Natural Market on the beach with many American packaged food products, like chips, dips and gluten-free flours. I focused on the vegan sorbet sign for Samba Sorbet. 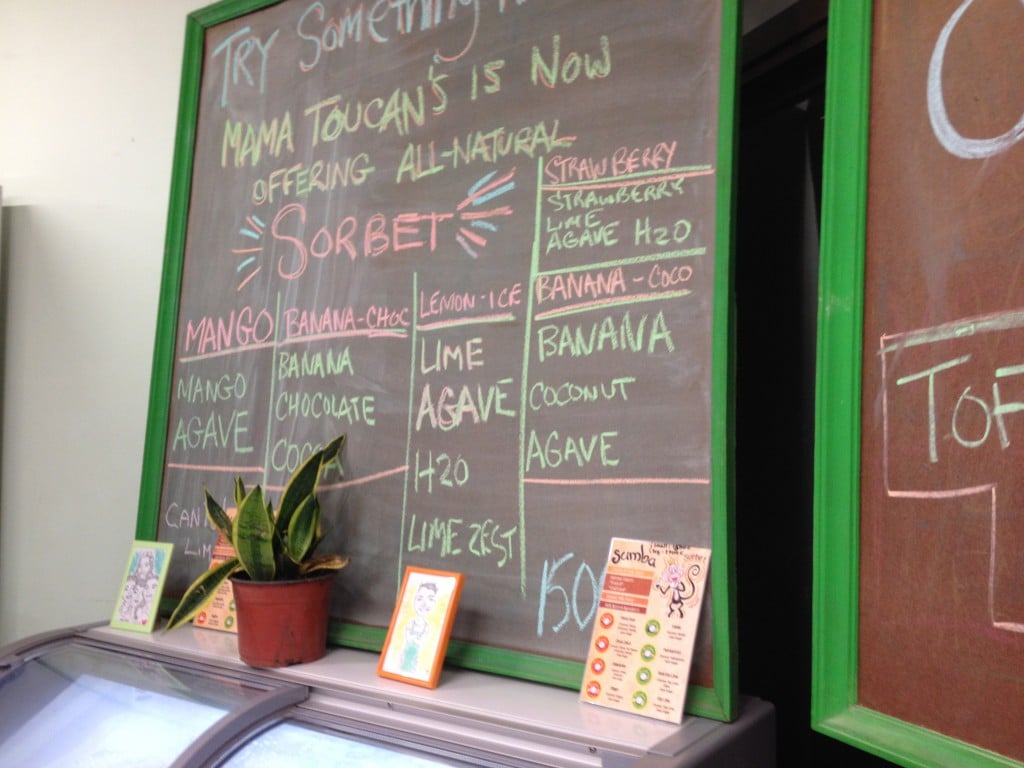 There were a number of interesting flavors. I chose Choco Spicy and Beth went for the Cappucino. There was pepper in mine which made it spicy and I loved it! Next time I serve vegan ice cream I will ask myself, “would you like fresh ground pepper on that?” Yes, please. Beth liked mine better and when she finished hers she bought a second one, the Choco Spicy. 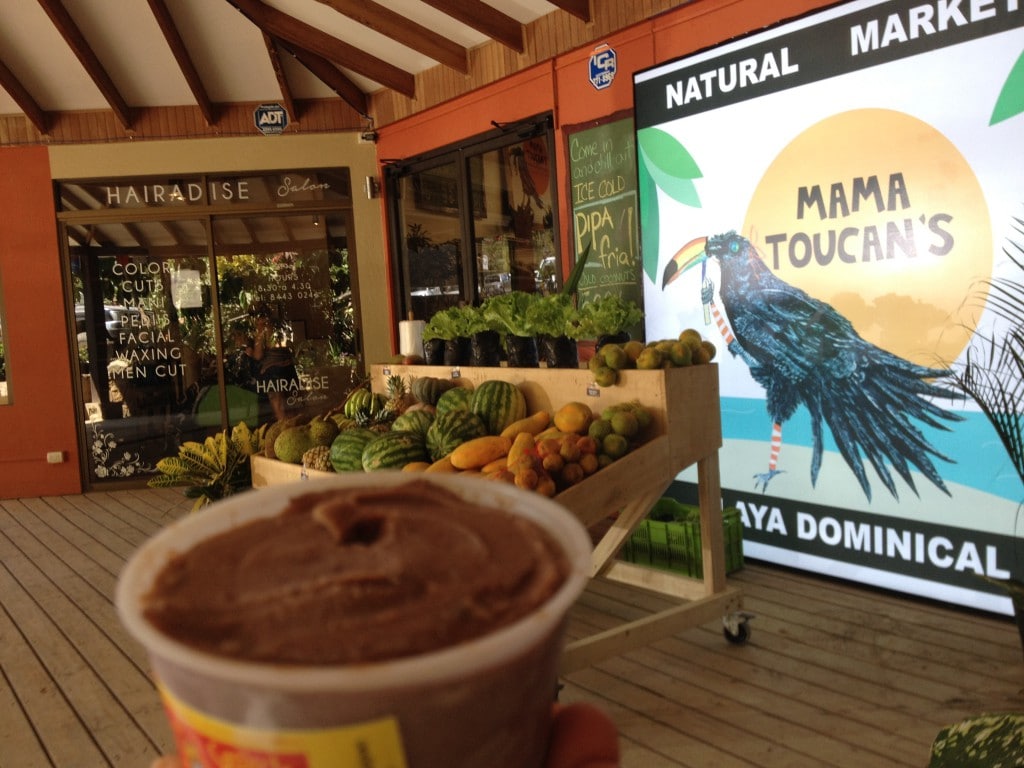 After spending time on the beach before going to the bus stop to get back we picked up some smoothies. Mine was Mango Banana and Beth got Passionfruit Banana. I liked hers better! It was tart and not as sweet. 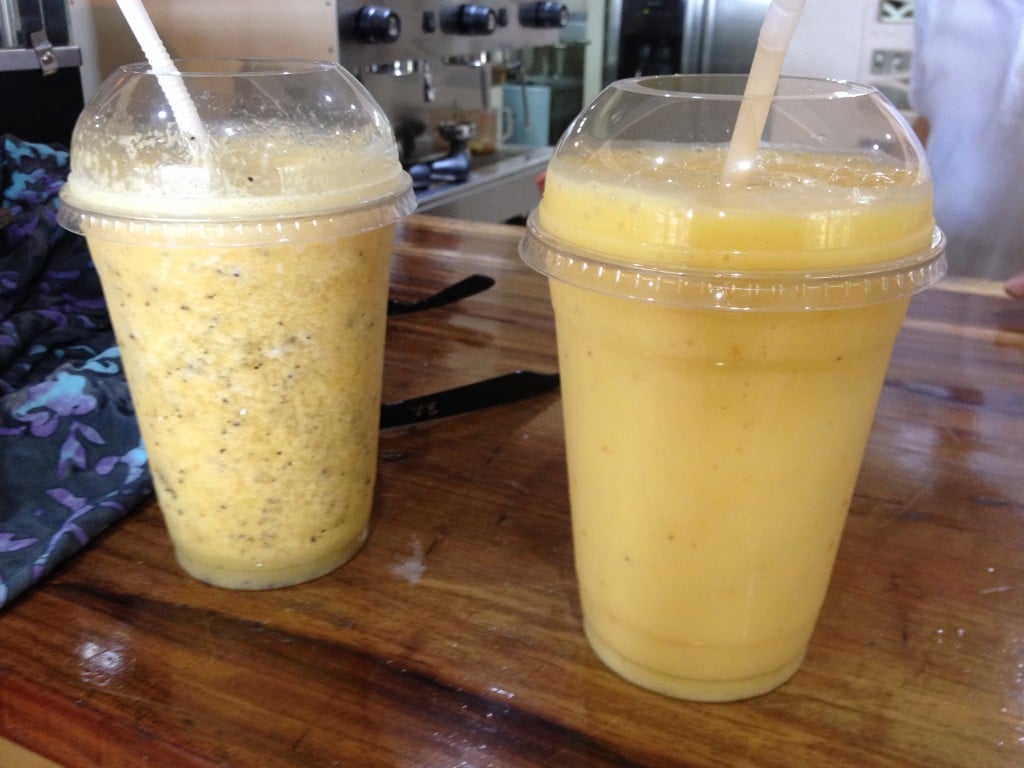 While waiting for the bus we chatted with a young woman heading for the Envision Festival. Beth had gone a few years ago and was very disappointed at how large it had grown, from 100 to 6000 participants and how drug oriented it was. Also, it was very invasive on the local environment to the point where many people call the festival “Envasion”.

While waiting for the bus a shuttle van stopped and offered us a ride for a very good price, practically the same as the bus fare. The driver was hot, his van was not air-conditioned and he was heading home to San Isidro. The driver dropped me off half-way in Tinamaste, by the dirt road that led to Beth’s farm. Beth continued on to San Isidro. I won’t see her again until Friday. It’s about a 2-hour walk from there and Beth told me a bus would be passing through and it was very likely that I could hitch a ride. Hitching is popular and safe in this area. Many people don’t have cars and the ones that do are happy to offer a lift. I actually got a series of three rides that brought me to Beth’s farm with very little walking in between.

Dinner: Once back at the farm I was hungry. After showering and tidying up a bit I made a meal. I prepared some chopped Green Cabbage with Sliced Plaintains. 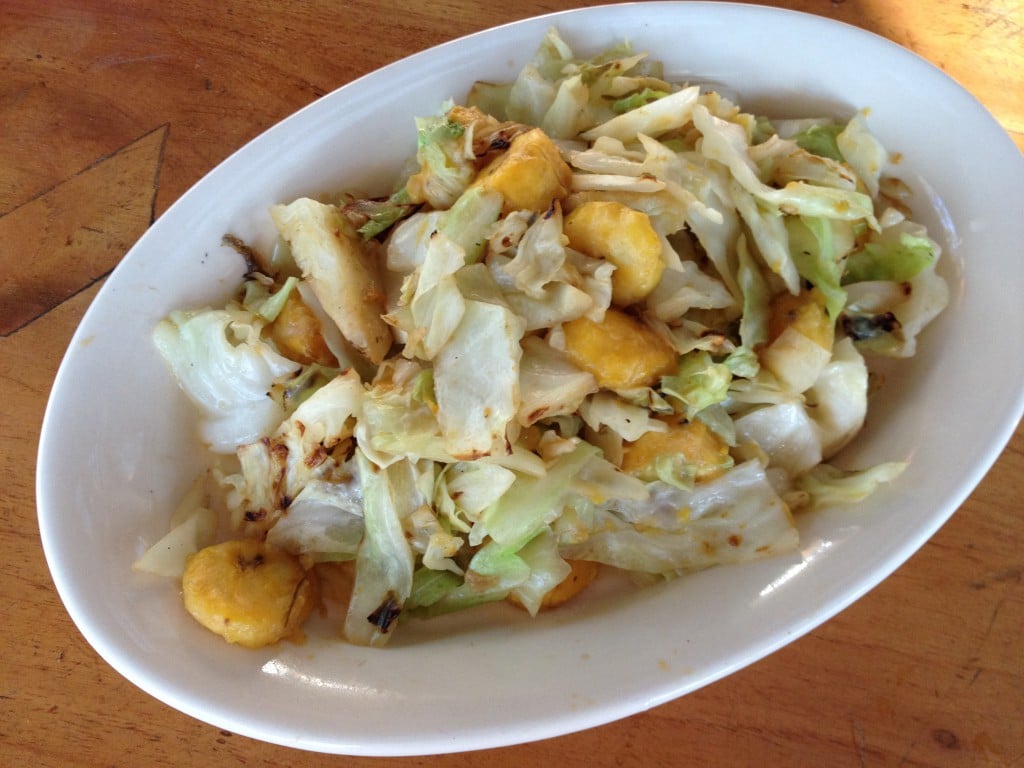 Next I heated up the remaining Split Peas with some Avocado and then blended it into a thick, creamy soup. 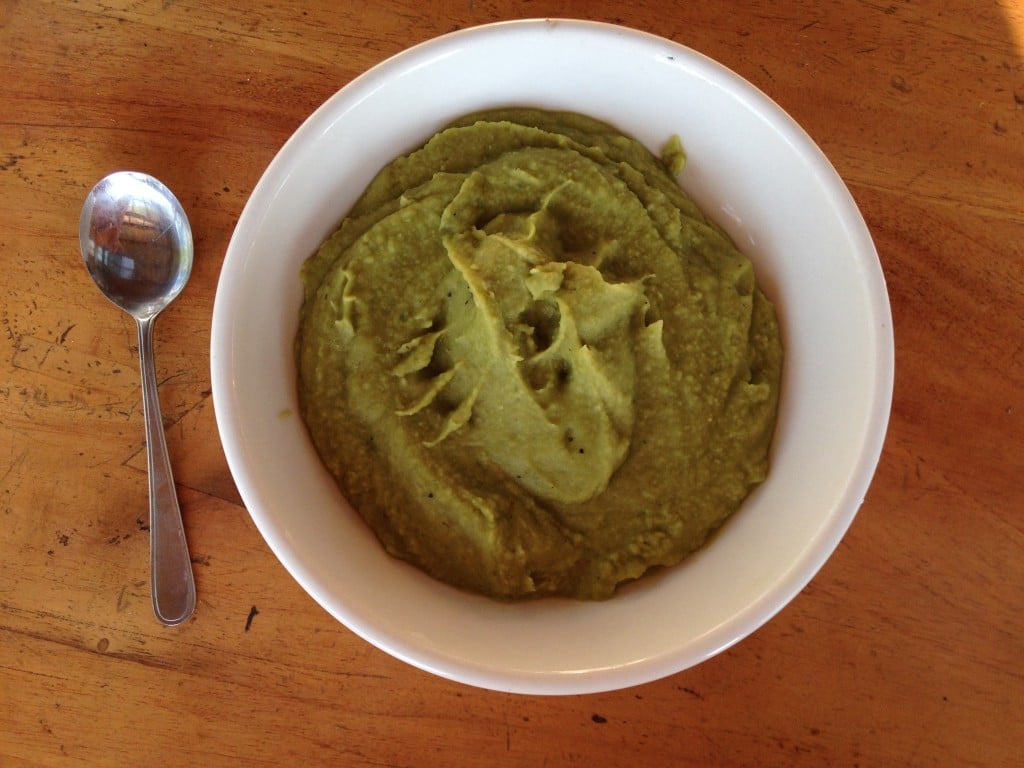 What I didn’t realize until later in the evening was that it was National Cook A Sweet Potato Day. And I did! I cooked two Purple Skinned Yellow Flesh Sweet Potatoes. I could only eat one, since I had made a lot of food! It was so good. Apparently Central or South America is thought to be the center of origin and domestication of sweet potatoes, over 5000 to 8000 years ago. I was reading in Proteinaholic about how the Okinawan people, known for long life ate mostly purple sweet potatoes, that are purple throughout. I was glad to at least have purple skinned potatoes.

For dessert I had about 1/3 of the piece of chocolate Beth offered me the night before. The sunsets at about 6pm here. How could I not take a picture? 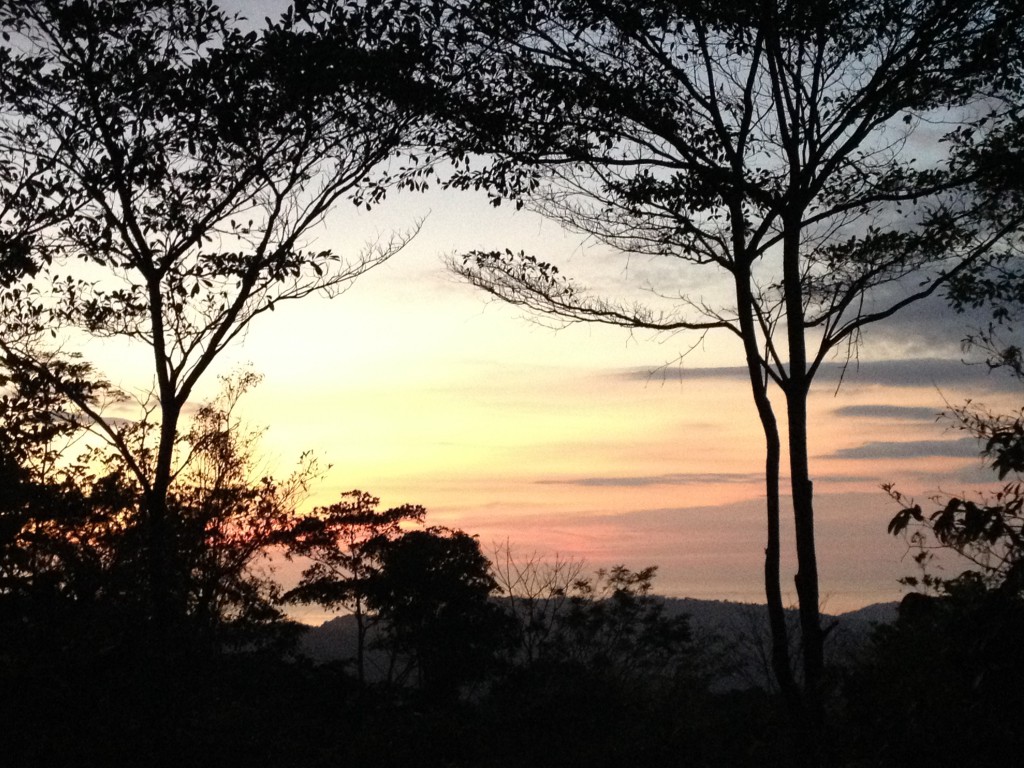 I did not want to turn the light on in the open-air living area because it attracts too many bugs but I needed to do the dishes. I cleaned up just in time as the power was going on and off. Fortunately the outage did not last more than a minute or so. To be safe, I went to my bedroom, closed the door and did some reading before going to sleep at 8pm!

How about you Gary? I miss you and your cooking!

I miss you too! Your food looks incredible today! Very colorful and exotic! And you had ice cream! I’m so happy for you! And now a little about my food day:

“Oh what a red and pleasant apple am I.” 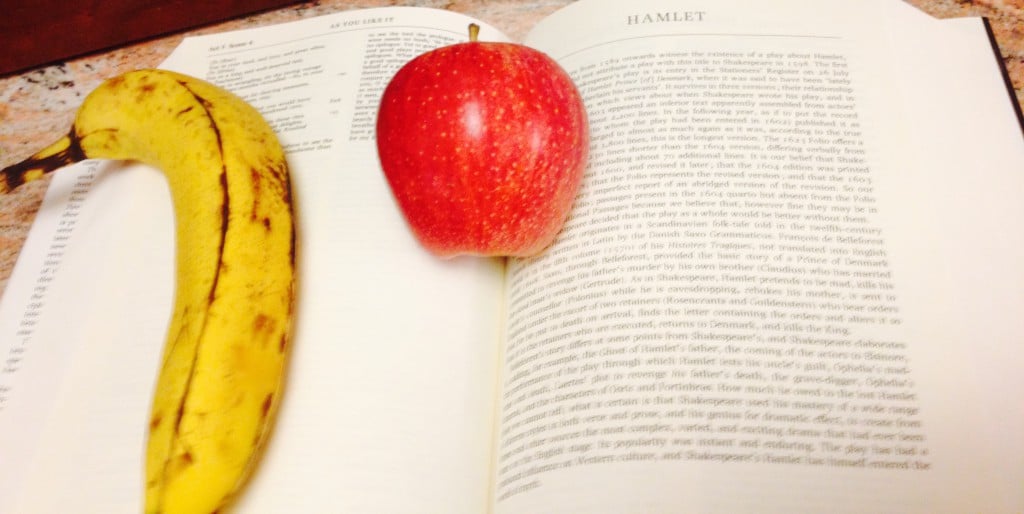 Monday morning I was off to acting class with an apple and a banana. The delicious organic fruit would have to sustain me through three hours of scene study in Greenwich Village and an afternoon meeting with our friend Don Lawrence in midtown —smack-dab in the middle of the Broadway theatre district where Don works at the Broadway Show, “Finding Neverland”. I’ve known Don since our theatre days together in San Jose back in the late 70s at The San Jose Civic Light Opera. I asked him for some of his expert and professional advice for a theatre project I’m working on— Don is a technical theatre genius and a good friend who gave me excellent advice. (And, no, it wasn’t, “Don’t quit your day job!”)

Somewhere in the middle of all of that I had a Starbuck’s tea with soy milk. I purchased the tea with the Starbucks Card my dear cousin Nancy gave us at Christmas time. The tea was Teavana Earl Grey and it tasted like dirt. “Am I becoming a tea snob?” I thought. Probably, considering we have amazing organic teas from Arbor and we distill our water. Now this isn’t always the case with Starbucks. At times they can produce a great product. But for some reason the “Bucks” on 14th Street and 8th Avenue was a little hectic on this particular Monday. But thanks to cousin Nancy I got a free and desperately needed hot drink before heading to to see Mr. Lawrence for some free and desperately needed technical theatre advice. I’m a lucky man to have such a great family and friends. 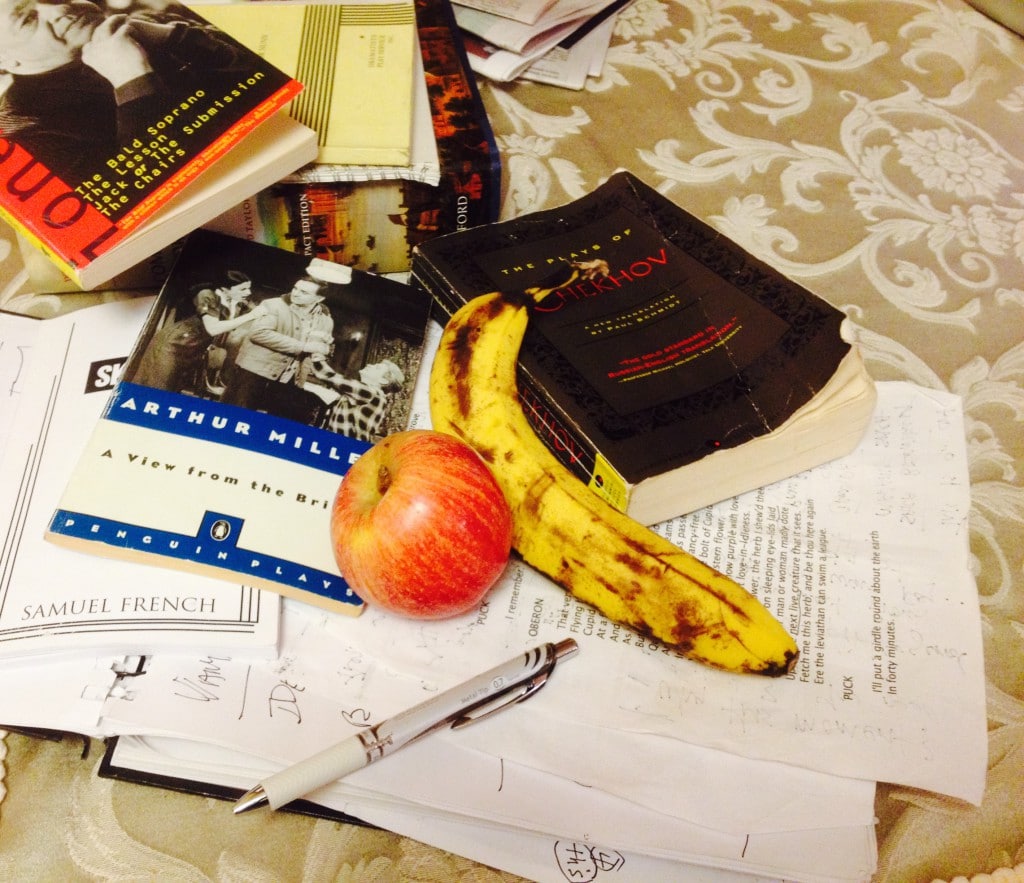 I was surprised at how the apple and the banana sustained me until I got home when I made another kale salad with tahini dressing and avocado. And I made croutons from the rest of “My Grandmother’s Torte Genovese.” I also polished off the mung bean and cabbage soup too. And tea. Lots and lots of our tea. I can’t remember what flavor I just know it was really good! 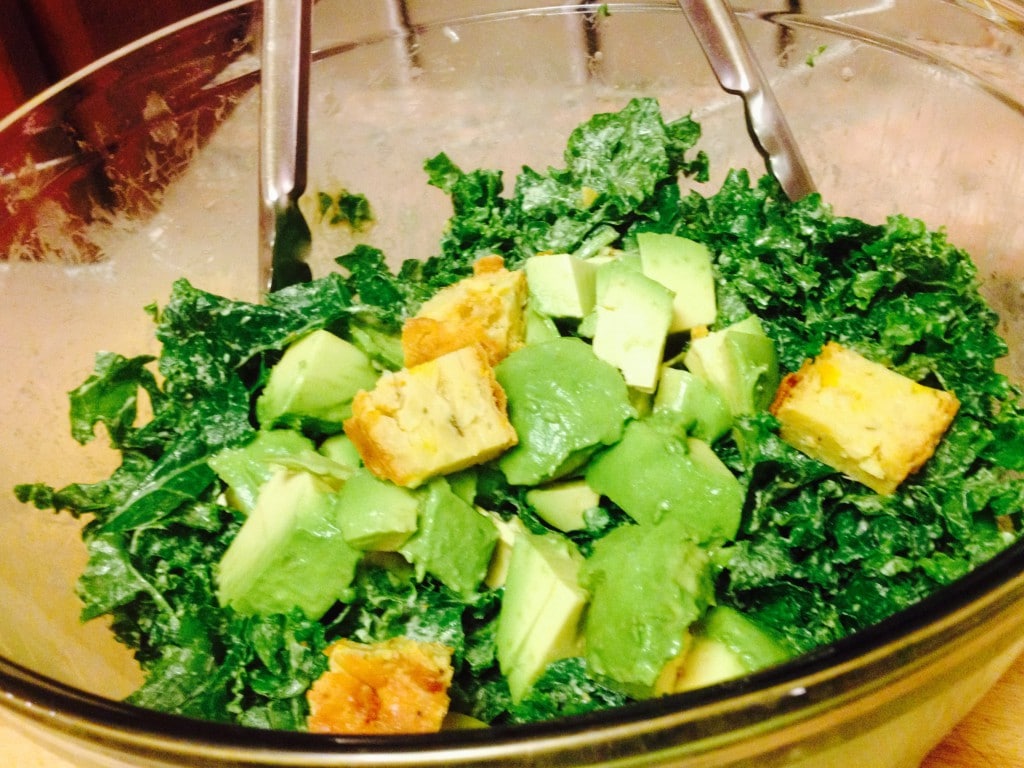 That’s it! Not as exotic a food day as yours but I’m forever grateful for the plentiful bounty of good clean wholesome food.

I look forward to having a meal with you in a few days. Meanwhile, I love you! And I know you’re having fun in Costa Rica! xoxoxoxo