Breakfast: You never know when you wake up that the day is going to be magical. This one was going to be. Gary had a rehearsal in Manhattan and then we would be meeting our friend Lawrence in Brooklyn for his birthday. Gary fortified us with Rolled Oats, Apples, Raisins, Chia Seeds and Soy Milk. 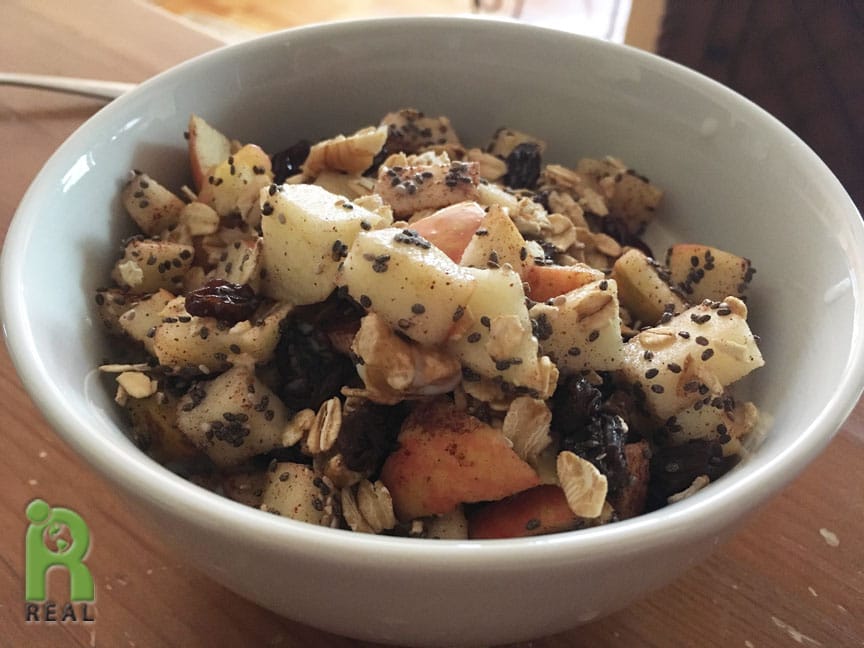 While Gary was at rehearsal, I went to the New York Public Library for the Performing Arts. It’s my favorite library. I had a book to read on my Kindle and since it was raining I appreciated being able to stay cool and dry inside the library. I headed to the back to look for seating. I have not been there for a while and now there is a cafe! Oy! People can’t go anywhere without eating or drinking! Why would anyone want to eat here with all the fabulous places just outside of the library in NYC? There wasn’t a big selection but there was one vegan item, a hummus vegetable sandwich. While I read, the people lined up to order their food and drinks. It’s a popular place! 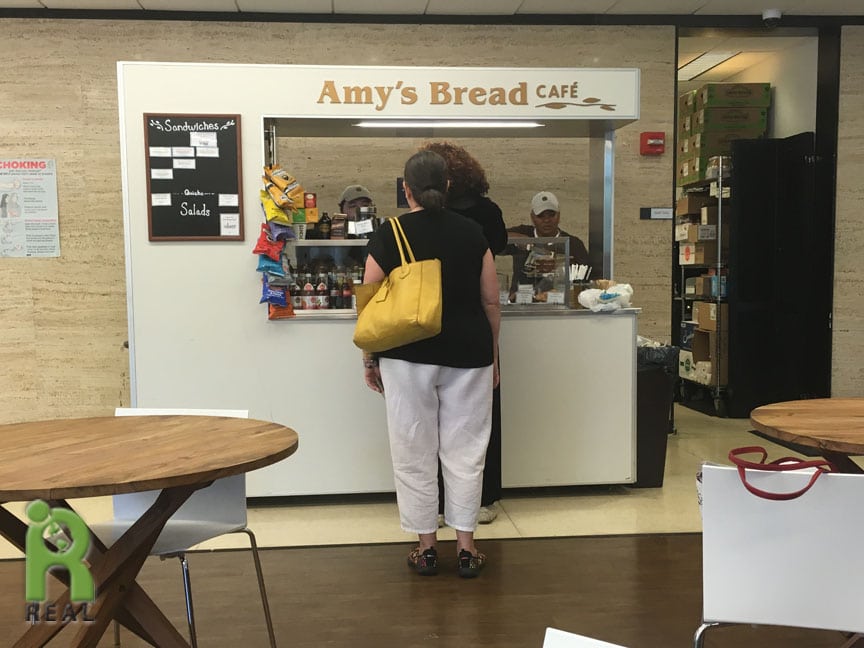 Snack: Gary and I were meeting Lawrence at Riverdel Vegan Cheese Shop founded by Micaela Grob. We had never been there. While we waited for Lawrence, Gary went into the shop to look around. I sat outside in anticipation. 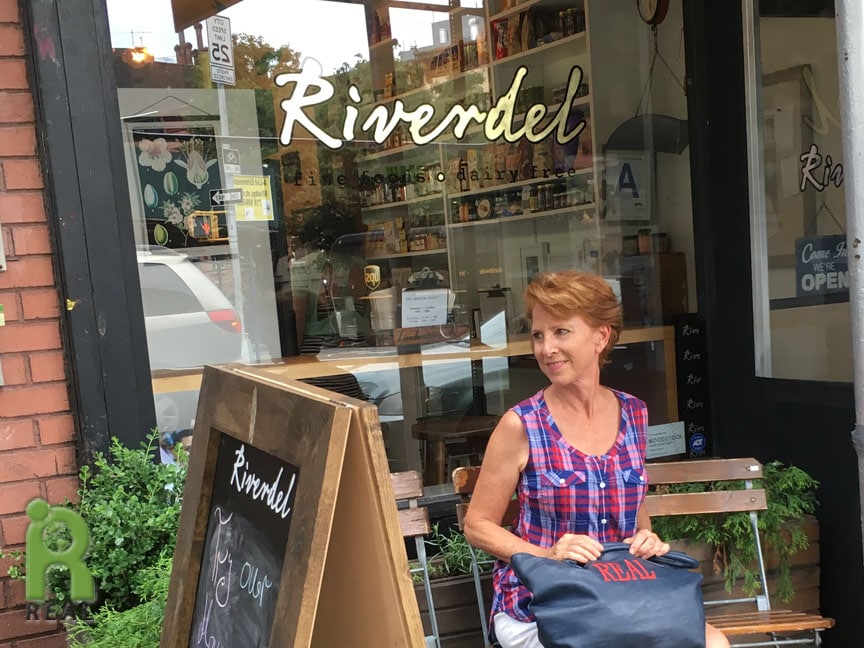 Gary brought me out a refreshing Cucumber Lemonade! 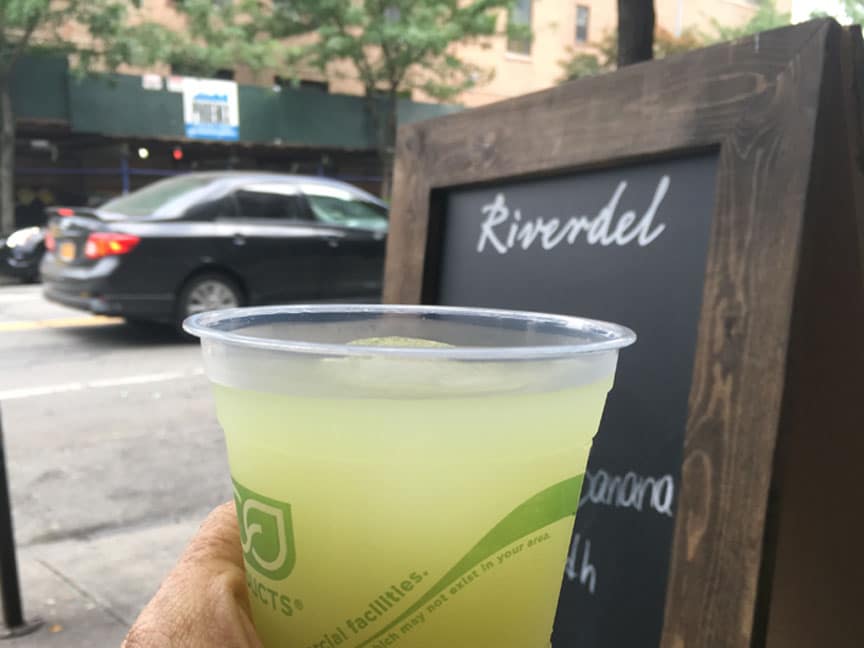 The shop is small but fully-loaded! This case had cheeses, cannoli and croissant – all vegan! 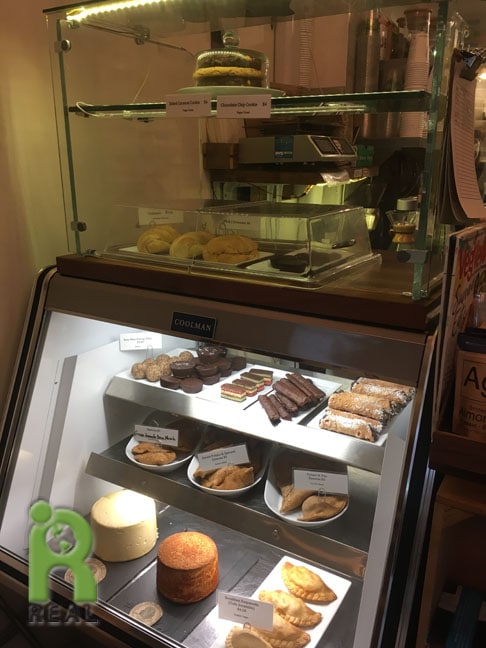 We weren’t sure which cheeses to buy. Many looked interesting. Leanna, the woman working at the shop told us she could make us a sampler of cheeses. Yes! What a lovely idea. She brought us Bryt Life To-Feta, Sacred Soulutions That’s Cheezy Parm, Violife Parm, Violife Just Like Bleu Cheese, Riverdel Heinrich (an aged beer cheese with caraway and mustard), and Vtopian Spicy Cheddar. First we tried the Vtopia Cheddar. Our eyes opened wide. Wow! That’s cheese. It was very tasty. Next up was the Riverdel Heinrich. Our eyes opened even wider. What flavor! It was delicious. Next up was the Violife Just Like Blue Cheese. Just like? It WAS. I had not tasted bleu cheese in 30 years. This was a miracle. Leanna told us she liked Cheezehound’s bleu cheese even more. We’ll save that for next time. Then we tried two vegan Parmesan cheeses – the first from Violife called Prosociano, which we loved. It had that dry cheese texture and the parm flavor. Next was That’s Cheezy. It was good, but soft. We like Violife better. The final taste was the To-Feta from Bryt Life. To me is was just salt. You know I don’t like things too salty and this was all salt. Gary and Lawrence liked it and confessed that they love salt, that Feta is supposed to hit you with that salt flavor. Okay. There was a big wheel of Cheezehound Mulshenock under the case by the registered. Leanna told us people said it was like Brie. Did we want to try it? Oh my! Yes. Could our eyes get any bigger? The flavors moved happily across my tongue, smooth and creamy with a smokey, bacon-like taste. Lawrence said it brought back memories of when he was in Europe. Okay, we got a package of that one that we shared with Lawrence and bought the Violife Parm and Just Like Bleu Cheese. 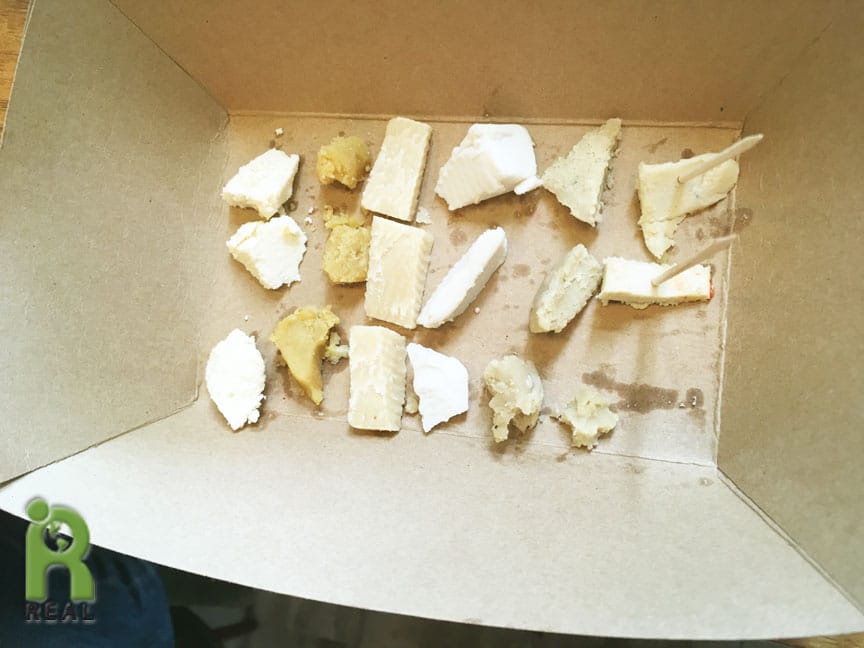 We LOVED Riverdel. Leanna was especially helpful. It was magical.
Dinner: Next stop was dinner. I found a Mexican place with vegan options just up the street – Citrico. It was a funky, colorful place with a creative menu. 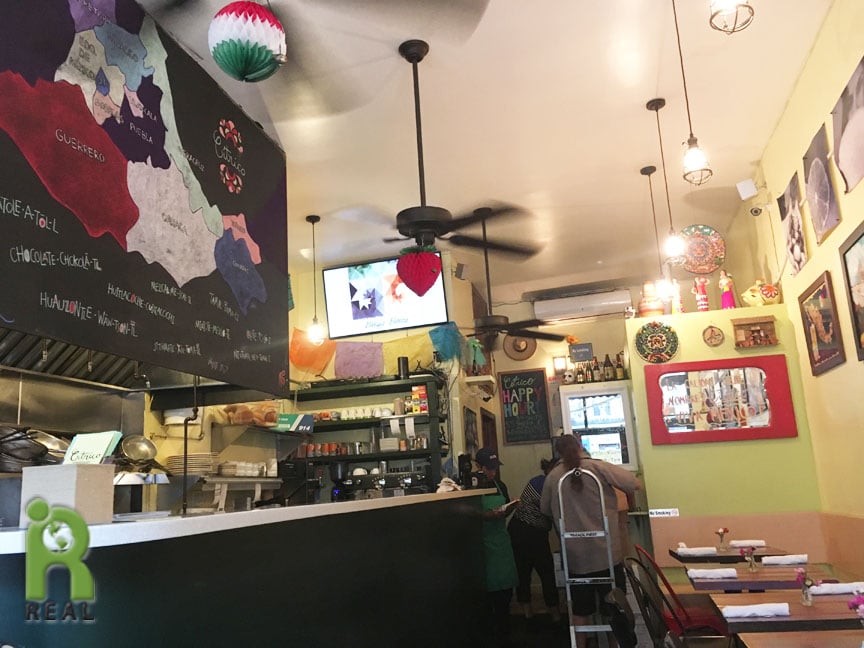 The Chips came with a bunch of cool dips and salsa. 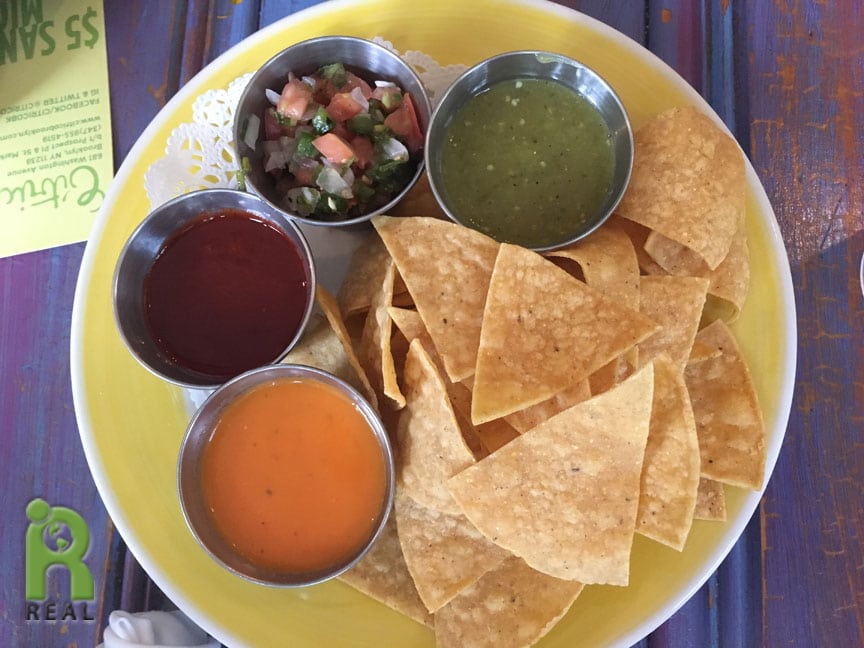 We got there early and it was happy hour. We were happy indeed. The beer was 2 for 1. Gary and I got the Modelo Negra. We confirmed at Barnivore.com that it’s a vegan beer. It’s so good. Lawrence got the Sangria. 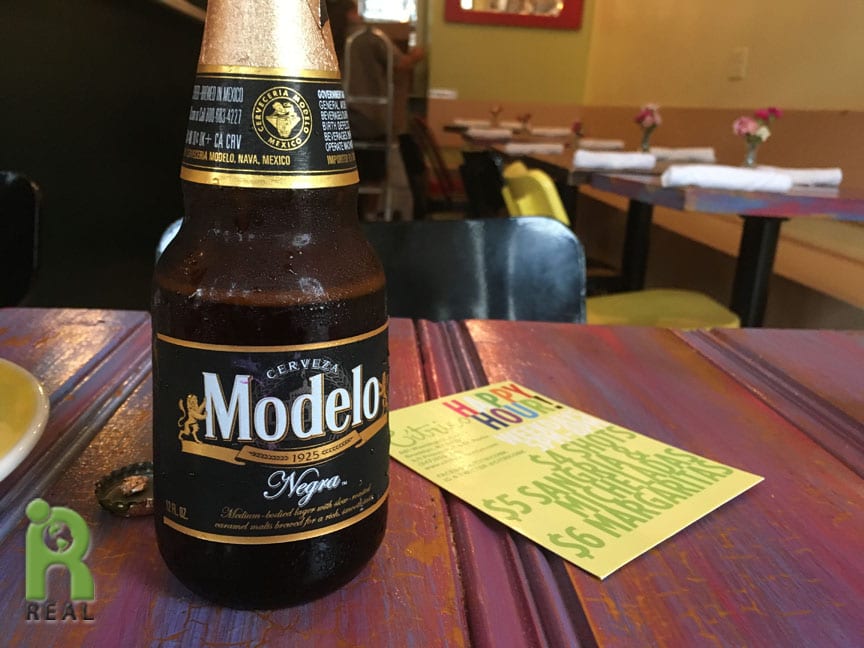 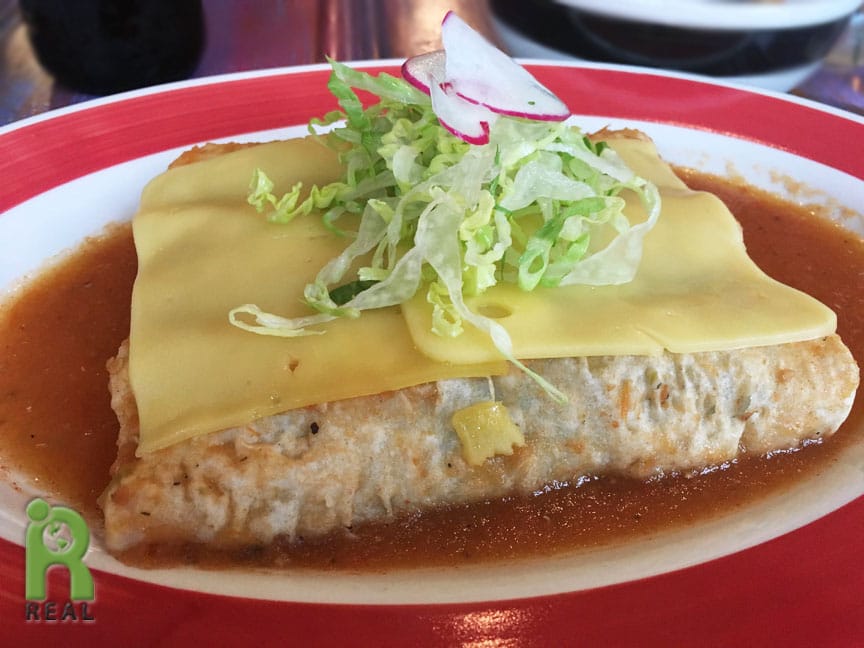 It came with Rice and Beans. 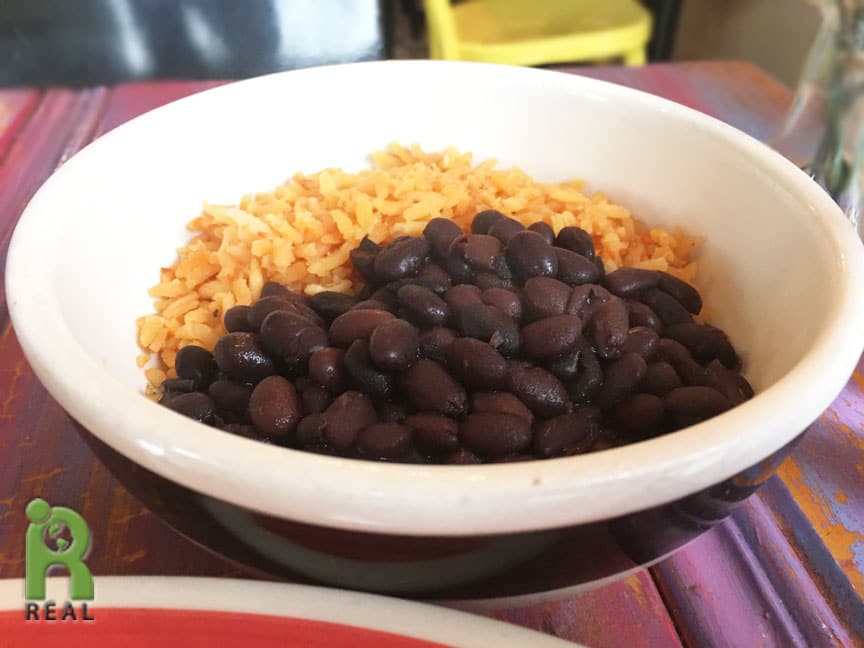 Gary went with the sides – Black Beans, Guacamole and Tortillas. 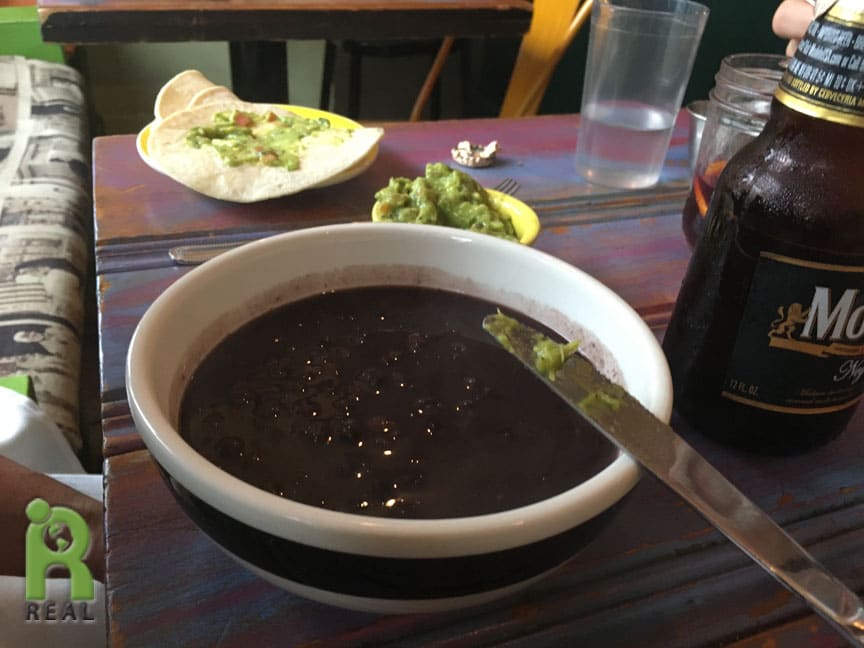 The service was great and we had a very fun time. This was another magical spot.

Evening: We left the restaurant and walked around Prospect Park. I didn’t think I could eat any more but Lawrence wanted to stop into Ample Hills for ice cream. 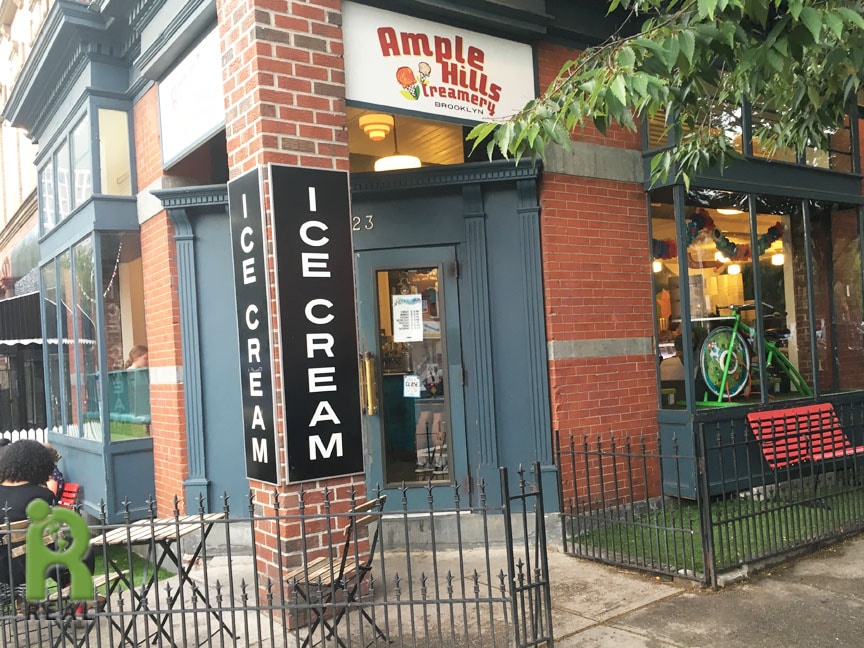 Yes, they had a vegan flavor – Oh Fudge! 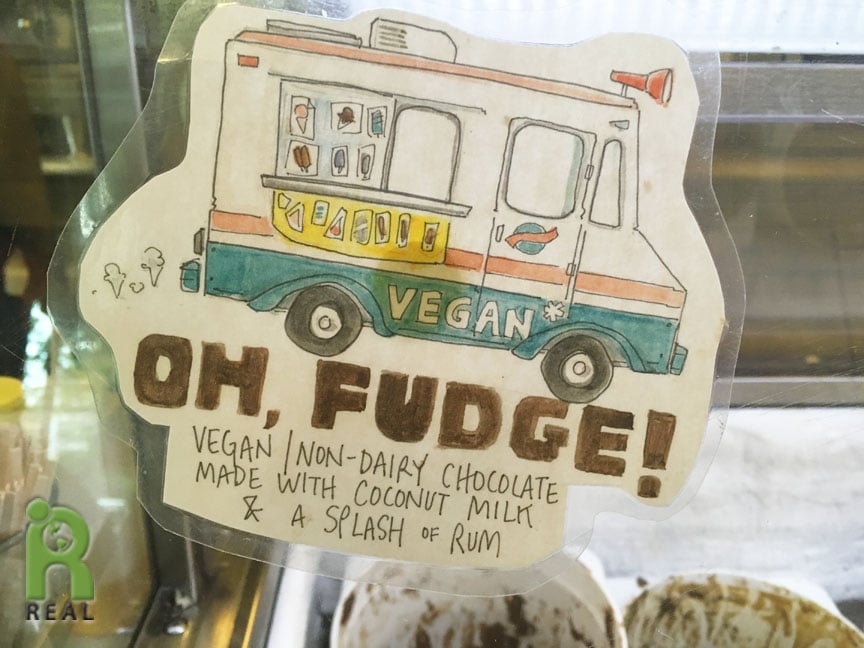 Lawrence and I both got a scoop. Gary demonstrated his amazing willpower and opted out. This was another magical place, with great service and fine music. Classic Motown music was playing and it was hard for me not to dance to it. 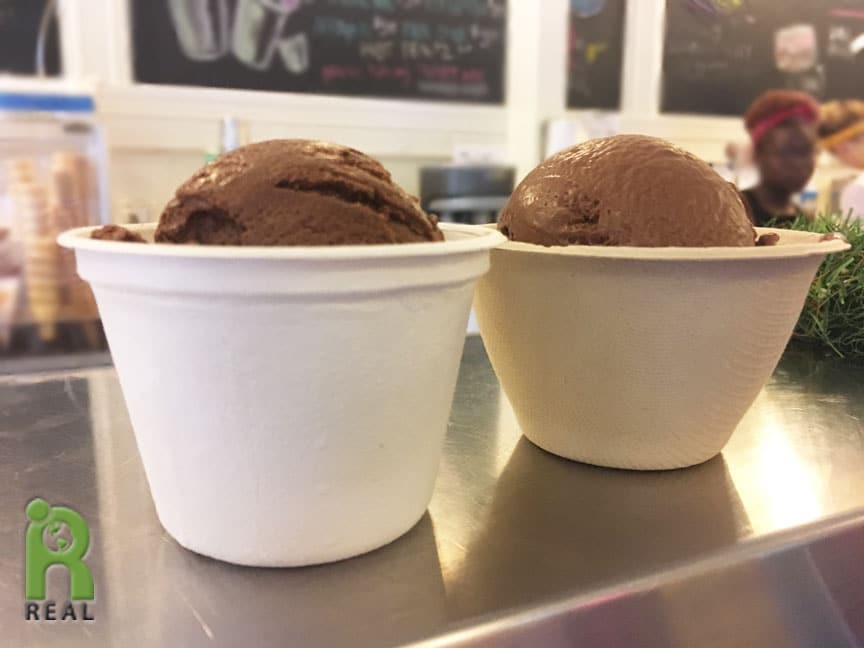 We strolled around Prospect Heights a little more in the direction of the subway. More magic – Lawrence bumped into an old friend. It was a sweet reunion. Last but not least, we passed a restaurant with this poster in the window. Thank you. 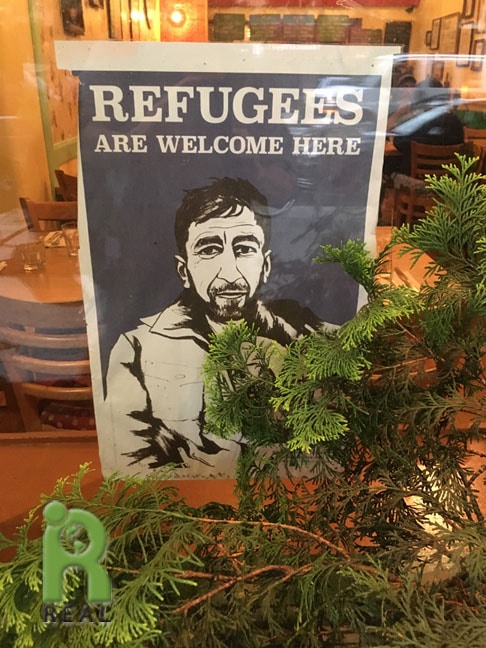