Breakfast: The day started nicely. I like to take my time in the morning, reading a little and drinking my tea. I had cold-brewed some Bai Mu Dan White Tea and poured myself a glass. Gary made a pot of Teeccino and frothed his Soy Milk. Everything was lovely and calm. I had soaked some almonds to make a new batch of Almond Yogurt and I was removing the skins. I find it a relaxing thing to do. Then we heard the door buzzer. Someone was there and buzzing frantically. It was our 91-year-old neighbor and she was in a panic. Her cell phone wasn’t working.

Let me give you some background. I got to know my neighbor about 15 years ago, after her husband died. During her late seventies and eighties, we’d invite her to some of our parties and she’d recall story after story, with amazing detail, about her life. She’d met many famous people along the way, as a buyer of children’s clothing. She’d even been to Cuba. Occasionally she’d share pictures to show us how good looking she had been. She did not like getting old or aging. Interestingly, no matter how many times we had invited her over, and fed her many meals, we were never allowed in her apartment. No one was, in fact. I had driven her once to her “country home” in New Jersey when she was getting ready to sell it. Although she gave away a lot of the home’s contents, she managed to stuff what was left into her small apartment. Over the years, she moaned about how hard she was working to take care of paperwork and clear out stuff. When she calls me, she often asks about a supplement or a certain food that people are talking about on the radio that she is curious about. She knows I know about food. She sometimes listens to my It’s All About Food show by telephone since she doesn’t have access to the internet. She likes to tell me what she’s been eating for the past few days: a veggie burger, some oatmeal, 1/2 of an avocado, some soup, etc. She likes to add turmeric to her soup too because she heard how good it is for her.

While we are on the subject of radios, her television stopped working a few years back, about the time everyone was required to switch from analog to digital. She gave up the opportunity of upgrading because that would have meant having someone in her apartment. I have offered many times to clean up her apartment and help with her paperwork. Her response was always the same, no. She’d sound exasperated and insulted when I would offer.

Verizon stopped her landline service about a year or so ago because she still had a rotary phone. When Verizon came in to wire our building for FiOS, my neighbor stuck with her old phone until it no longer worked. Apparently Verizon no longer supports rotary phones. That was okay until she got her little flip phone wet. I don’t know how it happened but she came to our apartment on the evening of December 30 in a panic. Gary and I were getting ready to go to Bethlehem, PA for a New Year’s party and when we returned to NY we would be flying to California for 10 weeks. The timing wasn’t great but we are here to serve. So, we ran out to find her a new phone and couldn’t. Later, while Gary set her phone in a bag of rice (organic brown rice, of course), I found her a new replacement phone online for $12. But I wouldn’t be able to help her set up the new phone until we came home from California. The good news is, Gary’s trick with the rice worked and her phone was working the next day. The bad news is that she never got around to asking for help to program the new phone.

About a month ago, she fell in her apartment. It was sad news, but not surprising. Her home is cluttered with furniture, papers and stuff that she can’t seem to part with. She is weak with vertigo and has edema in her legs. She didn’t have her cell phone with her and she had no way of communicating that she needed help. I have no idea how long she was on the floor but at one point she managed to get a piece of paper and pen and write a note asking for help and slipped it under her door, out into the hallway. Another neighbor saw it and called 911. Our hall was filled with EMTs and Firefighters. They wanted to take her to the hospital to check her out. One of the EMTs said she could not return to her apartment, that it was not safe due to all of the clutter in her apartment. I got a glimpse of the apartment and a whiff of urine odor. She refused to go. Over and over, she refused. Nothing could coax her. I thought she’d enjoy the three meals a day and all the television! But no, she would not go. After a few hours and a lot of phone calls some anonymous doctor on the phone who spoke with her, but had never examined her in person, decided she was fit to return to her apartment. After that experience I hoped she would look into being more prepared for another event like that in the future.

Last week her old flip phone could no longer be charged. She was frightened not to have a way to communicate with anyone. She stood at my door, shaking, in her bathrobe, desperate for help. I let her in and followed the instructions to set up her “new” phone. It took a while to get it working, to charge the battery a little and then explain to her how to use it. At 91, she is hard of hearing and does not have hearing aids. I breathed in deeply to stay calm and noticed the slight smell of urine about her. I trained her how to use her phone and she left.

This brings us up to date to the present, this morning. My neighbor was back at our door, in her bathrobe, with her new phone. “It’s not working,” she cried to me. I thought it might be the battery. She said she had been charging it but it would only get charged half way. I told her I would take the phone and try to fix it and bring it back to her. She pleaded with me to let her in. “I won’t be able to make it if I don’t have my phone to use right now! Please let me in!” This is the person who will not let anyone in her home! Of course, I let her in. I plugged in the phone and showed her that it was still working. I told her I would order a new battery for her and suggested she keep it plugged in when she needed to talk. I wanted my neighbor to make sure she understood how the phone worked so we practiced with me calling her and having her call me. Finally she left.

I was shaken. I kept thinking back to my conversation with Carol Adams, Patti Breitman and Ginny Messina, the authors of Even Vegans Die. The book has lots of helpful information for everyone, not just vegans about how to prepare not just for when you die, which could happen at any age, but for your care and the care of your household, should you need it. They discussed having a plan, a plan for who would care for your companion animals if you have them, as well as having a health proxy and a will. I knew my neighbor had no plan at all. I’ve tried to help her, slipping forms and other paperwork under her door to review but she’s done nothing. All I could do in this time of crisis was help her with her phone – her lifeline to the outside world. I was hungry. I ate three Carrots. Then I had half of a baked Sweet Potato. I prepared the Almond Milk for the yogurt and grated some Cabbage to make sauerkraut. I put some dried Garbanzo Beans in a pot to soak. It calmed me down.

Lunch: Gary got home late in the afternoon and we were both really, really hungry. We had a giant Kale Salad with Marinated Tempeh, Brown and Red Rice, Red Onion and baked Sweet Potatoes. We ate on the terrace. All was well with the world. Our world, at least, but I was not in a good mood. I was feeling sad and frustrated. 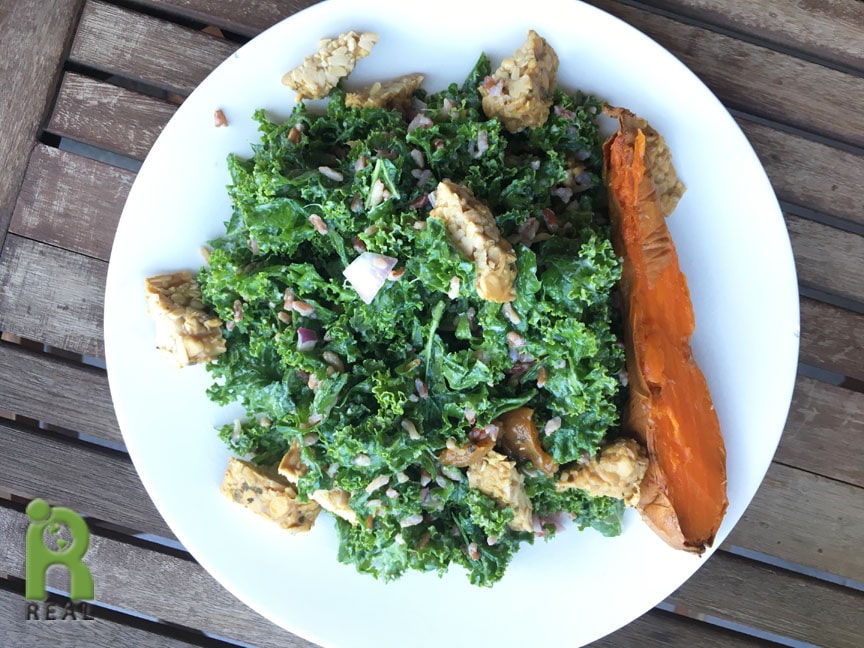 In the evening we regularly practice singing. It was Gary’s turn and I was working on the computer. We got a text from another neighbor asking if we were home. She called and told us our 91-year-old neighbor was still having phone problems and could I work my magic! No, I couldn’t. I had already ordered a new battery, there was nothing more I could do until it arrived. But then I thought of something. When the phone loses charge it shuts off. When you recharge it, you need to hit the power button to turn it on. I knew she wasn’t doing that. I explained what was required and that was that.

Dinner: We were both drained from the days emotional events and did not want to cook anything for dinner. We had enjoyed our Cheese Platter with Crudités and Figs yesterday and thought we could do something similar. I started the Garbanzo beans cooking and made Fig Butter with the dried figs. (Fig Butter: 10 ounces of dried figs cooked in two cups of water until soft, then blended until creamy). I sliced up some Apples, prepared the Carrot and Celery Sticks and Gary made the Tahini. We each had a bowl of Garbanzo beans. It was a fun, summer dinner, where we were able to unwind a bit, chatting, munching and dipping. And there was that Cheezehound Mulshenock. A slice of Apple topped with Cheezehound Mulshenock Cheese and Fig Butter was heavenly. 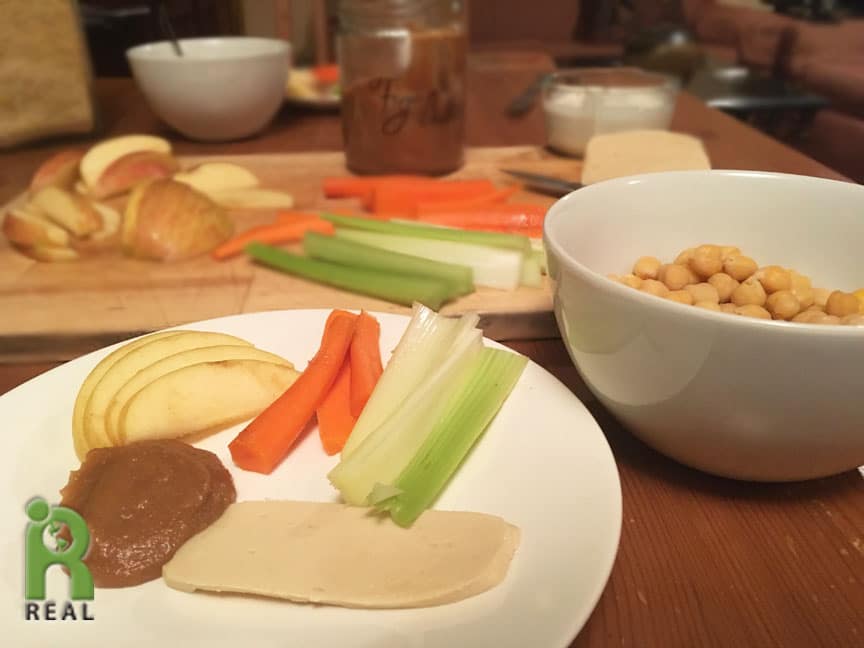