Breakfast: I planned to visit my parents today and wanted to get off with a good, nutritious start. I made Fruity Corn Waffles. I mixed the batter up in the Vitamix and then added the chopped Apples and Raisins. I didn’t realized that the Apples stayed on top and the Raisins fell to the bottom. The first four waffles I made were loaded with Apples and the second four had all the Raisins. I also made some Strawberry Coulis for the topping. They were so good, with Apples or Raisins, we ate them plain without any toppings! 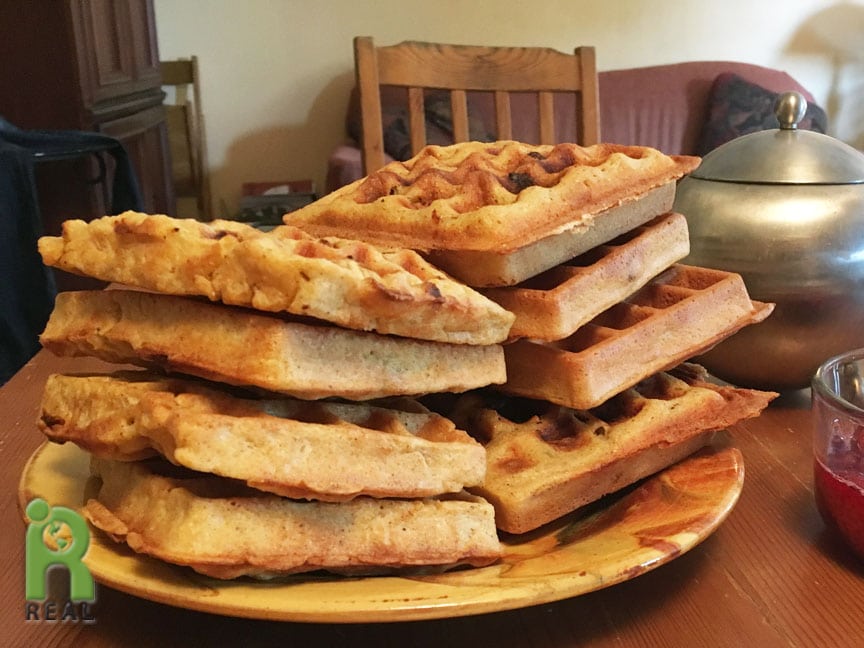 Lunch: We spent some time at the doctor’s office and afterwards I wanted my parents to eat some healthy food. I had been wanting to try Plant-Wise ever since they opened but I could never get my dad to agree. Today was the day! When we arrived I spoke with one of the friendly staff people about the menu. I wanted something that didn’t have too many spices for my dad. The Tomato Chickpea dish with Tomato and Chickpeas in a creamy Tomato/Coconut Cream Sauce, Beanballs with Raw Spinach and Brown Rice looked like the safest choice. I was offered a small cup for dad to try. He liked it. 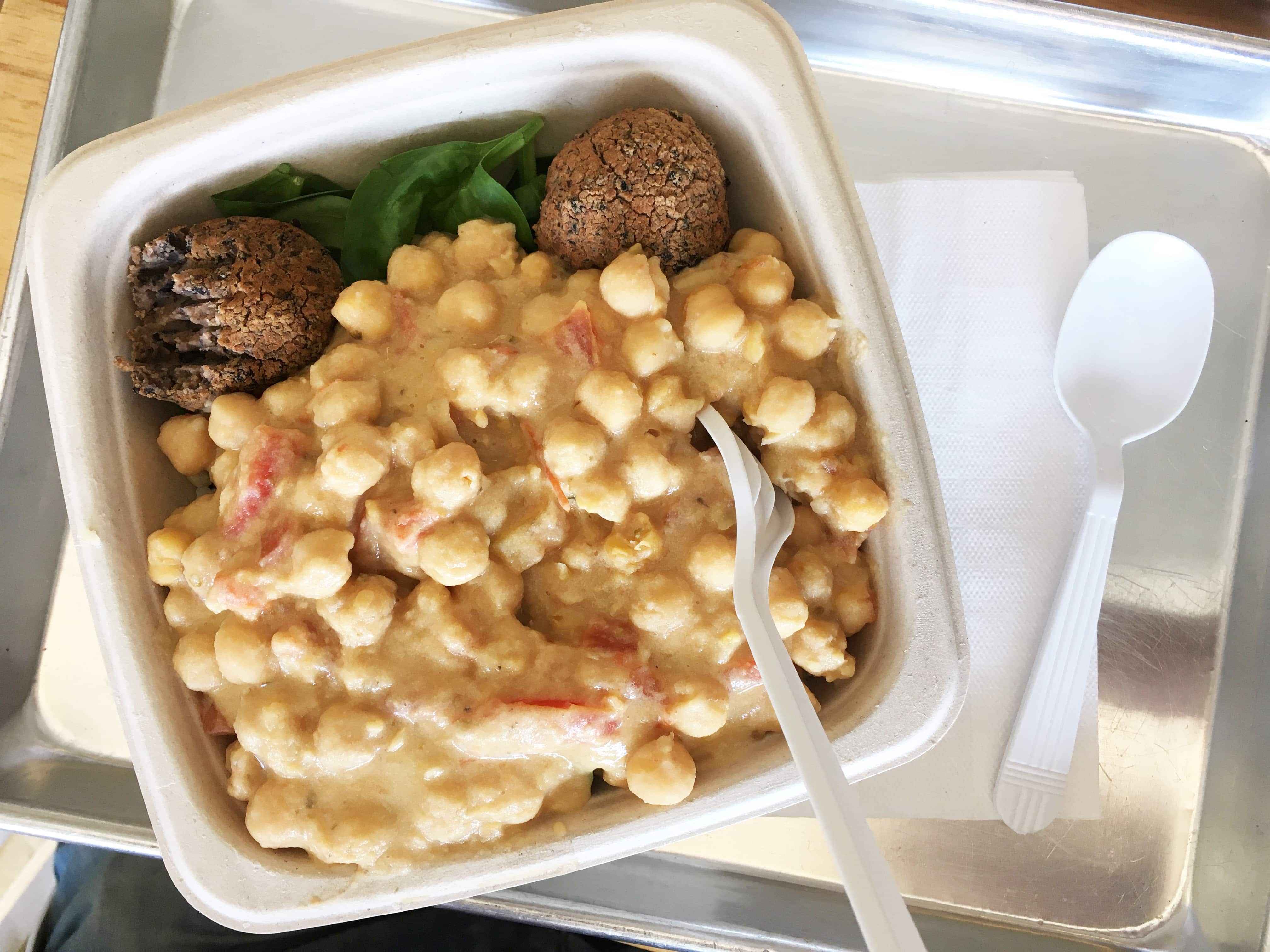 I went for the spicier option: Masala Bowl, Chickpea Masala, Tomato, Falafel Balls, Sunflower Tahini with Raw Spinach and Quinoa. I liked it and I’d order it again! It was very flavorful and very filling. 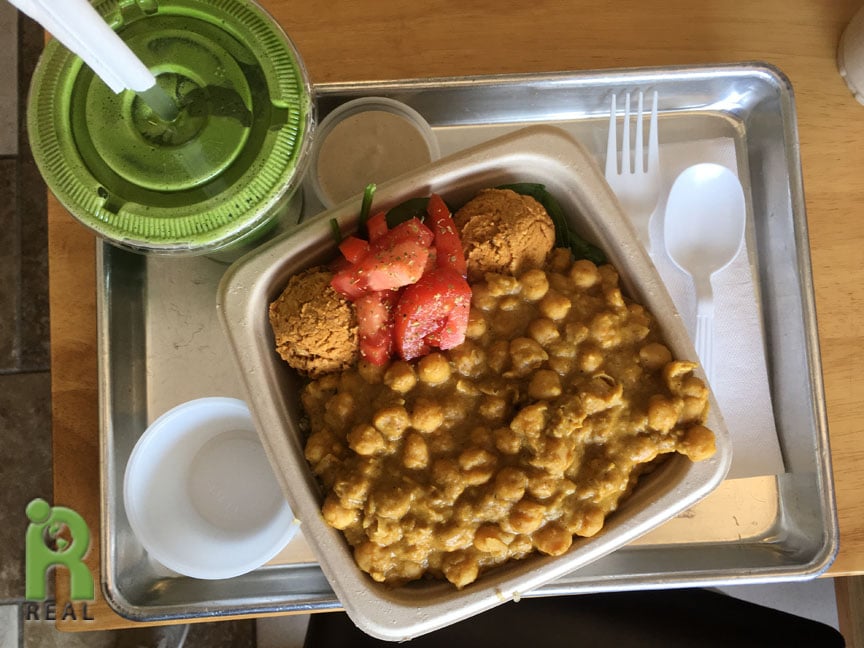 My mom was interested in the Rock Out Wrap with the Veggie Patty. In Mom’s dish there were shredded beets, Kale, Red Onion and a “Veggie Patty. It was further explained to me by the server that the Special Sauce (BBQ/Cashew/Dijon/Sriracha) was mashed into the patty to hold it together and could not be left out so I asked them to just leave out the Sriracha sauce, which they happily did. (Service was very good.) At first my mom liked it but she didn’t love it. She ate half and was quite full. I think she would have preferred all the ingredients separate and not mashed together. She also wanted to see the Veggie Patty. She won’t get that again. I’ve heard it said that there comes a time in life when the children of aging parents become the parents and the parents become the children…this was one such time. 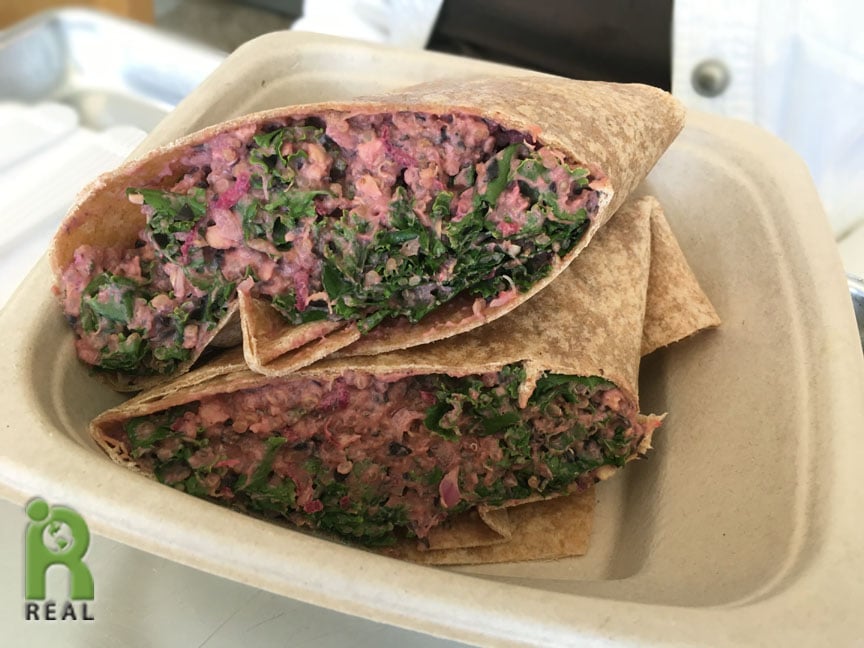 I ordered a Green Advanced, a green juice with Kale, Spinach, Celery, Cucumber, Lemon and Ginger. My dad tried it and hated it! I loved it. It was fresh and delicious.
I also ordered the Dream Date, a smoothie with Almond Butter, Dates, Chia Seeds and Banana. I told my parents it was a thick shake and they liked it, as I knew they would. We all ate half of our lunches and were quite full. I got to take home the leftovers.

Dinner: My mom came along to sit by the Club House pool while I swam my laps. It was like meditation. Afterwards, I enjoyed a Fruit Salad.

Evening: I made a some Rooibos Tea before going to bed.