Breakfast: I was so stuffed from my two giant bowls of soup last night I had no interest in eating. I made a thermos of Teeccino and Soy Milk to bring to Gary. We were having a morning meeting in San Jose with the production staff for the musical we are directing. Gary had bought a bag of Teeccino a week ago, after being without it a couple of weeks and he left it with me in Walnut Creek. Poor thing! I made myself some Oolong Tea and brought some mixed Raw Nuts and a Banana to eat on the ride down that took about 100 minutes in rush hour traffic.

Lunch:
After the meeting I met my friend Ann for lunch. We went to a vegan place called The Happy Hooligan, vegan comfort food. I had never been there and love trying new vegan places. The menu is comfort food, vegan-style with lots of burger and fries options. I probably would have enjoyed one of the salads a lot more but I wanted to try a burger. I really wanted a burger with mushrooms and sautéed onions but none of them had mushrooms. Their burgers are soy-based. I chose the Chili Burger because it came with a homemade vegan cheese sauce rather than the vegan cheese slices. When asked, they told me they used Follow Your Heart cheese. I like this company a lot, but I don’t like their cheese slices. I thought the Chili would have beans in it, but I was wrong. Gary explained to me later that some Chili is just meat and sauce without beans and this was likely a vegan version of that. I ordered it with Pesto Fries. I am sure many folks who are used to conventional fast food would love this. For me it was way too salty. I used to love the soy-based burgers, like Boca Burgers, but my palate has really changed and most overly processed foods don’t appeal to me any more. 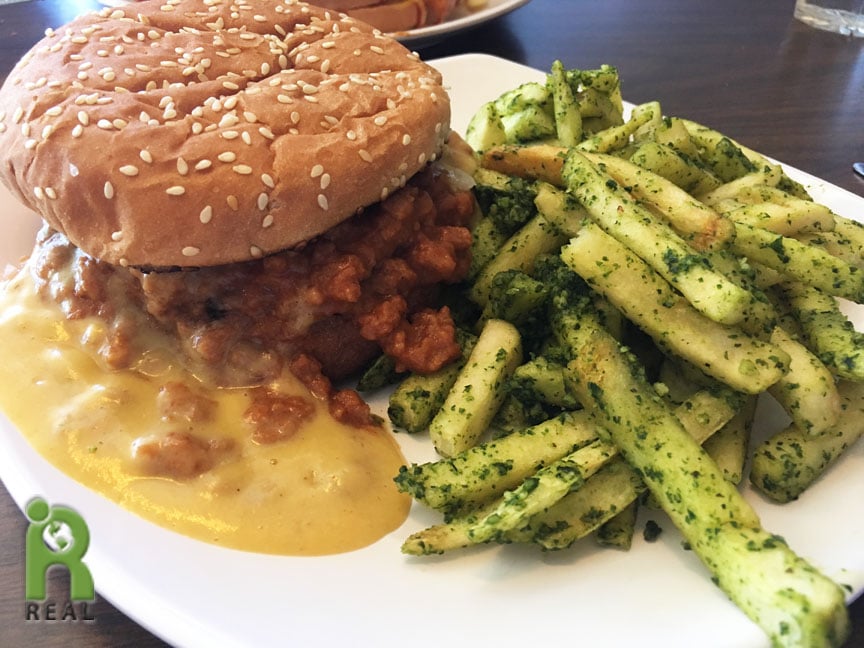 Ann got the Dream Burger. 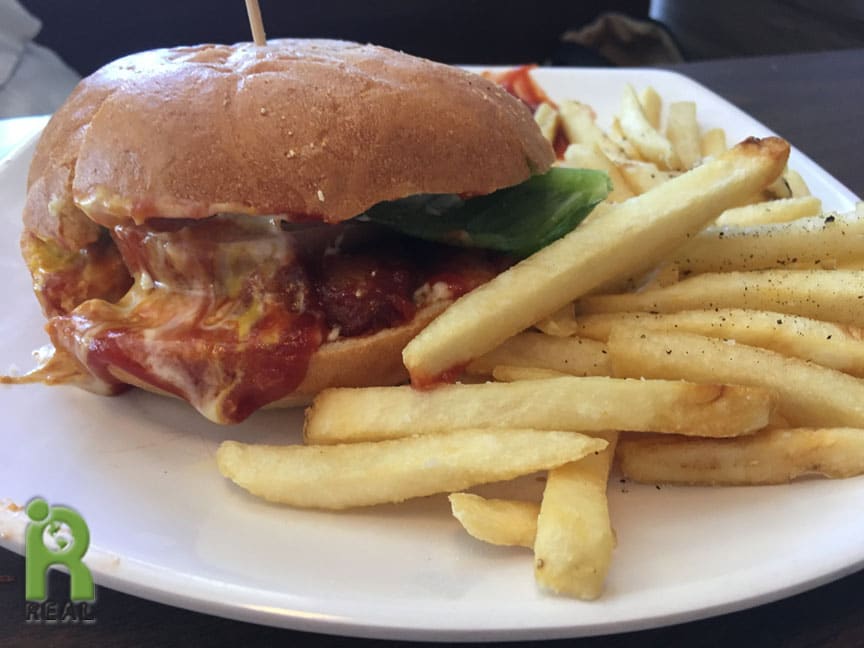 What we really wanted were a few Onion Rings. I noticed there were onion rings offered on a few of the burgers but they were not listed available to be purchased as a side. It’s a rare treat to find a place that serves vegan onion rings. We chatted a bit with the servers, Rachel and Shannon who were both very nice. We learned that they don’t make a lot of onion rings, just enough to garnish a few of the burgers. We couldn’t get a basket of them but we got a plate of two. That was perfect, one for each of us. A basket of them would have been too much, too oily and greasy. But one – a great treat. It was perfect. 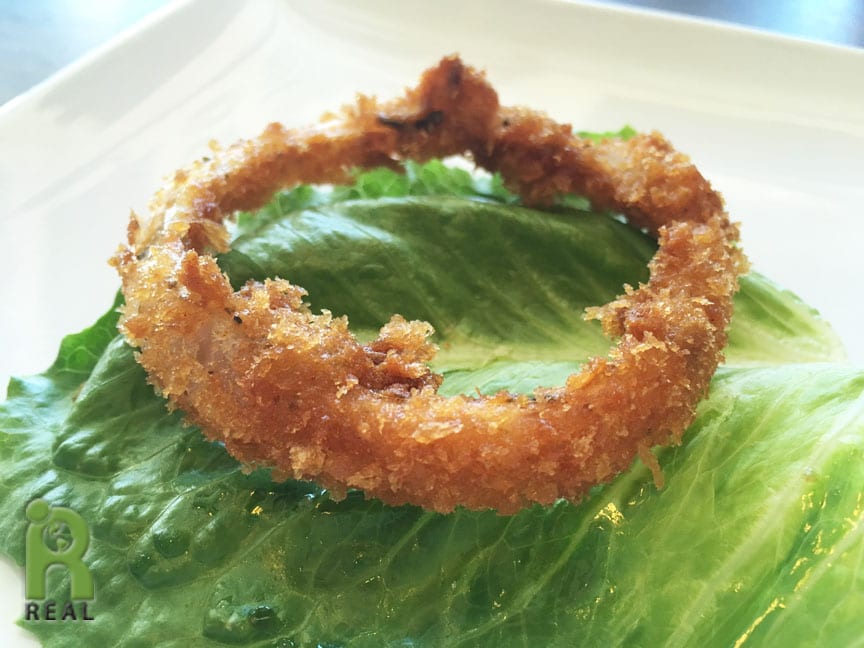 Dinner: Afterwards I drove over to Gary’s sister’s house and we took a walk around the Rose Garden. I needed it after my heavy meal. Afterwards I went to the home of some people in our upcoming cast of The Music Man to give one of them a voice lesson. It was in San Jose, near where Gary is staying. After the lesson I went back to see Gary. He had made a beautiful dinner of his famous Baked No-Egg French Omelette Soufflé with Kale and Onions (as seen published in Living the Farm Sanctuary Life) and Baked Fries. These fries were so much better than the ones I had for lunch, baked, not fried and no salt. Just the flavor of quality, organic potatoes. 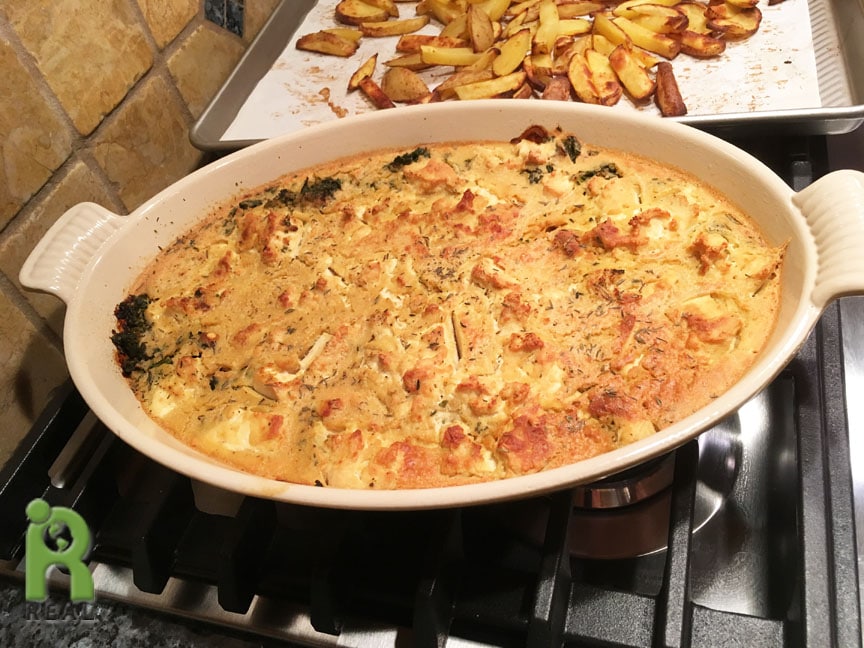 Evening: After dinner, I drove to Walnut Creek to Gary’s niece’s house where I am cat-sitting. I made myself a cup of Cocoa Spice Tea. 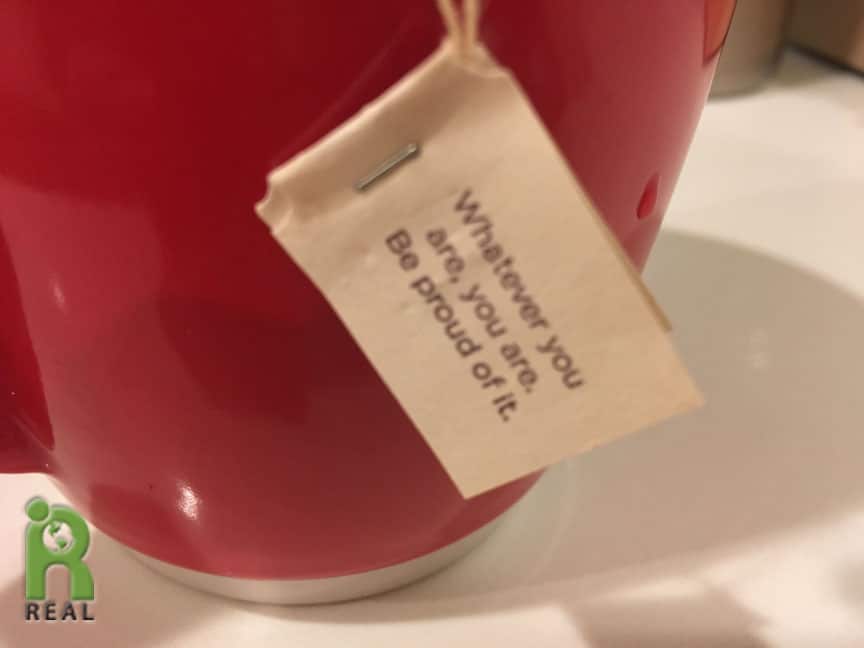