Robbyne Kaamil just passed this week. She had pancreatic cancer. It was a shock to many. Today’s show includes two It’s All About Food interviews with Robbyne as a tribute to her beautiful spirit. 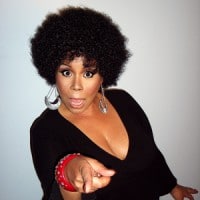 Robbyne was the Executive Producer of the PBS television show, Urban Animals. She was a passionate animal rights activist who wrote several award winning public service announcements for PETA which ran on Fox, ABC and Bounce television affiliates nationwide. She co-wrote the song, “Free the Monkeys”, with fellow activist and HLN Television Host – Jane Velez-Mitchell which shed light on the mistreatment of monkeys being used in lab experiments in Hendry County, Florida as well as the song “Free Lolita: Let the Girl Go” to raise awareness about the Orca Lolita who is being held captive at the Miami Seaquarium. She authored the children’s books, Saving Benjamin and Food for Alex. Each of the books encourages social responsibility and community involvement. Robbyne was also a comedian who matched wits with Howard Stern and was featured on numerous television and radio shows. She toured with her comedy show, “2 Queers & A Bitch”. Her monthly advice column “Dear Diva” was featured in Australia’s DNA Magazine. She also served as executive producer on several independent films.