Breakfast: Gary surprised me with Garbanzo Bean Flour Waffles. I was working in the bedroom trying to finish some work in the morning before we took off on a little day trip upstate. The smells coming from the kitchen were so good. He prepared a Strawberry Banana Purée and Apricot Butter that we put on the waffles. 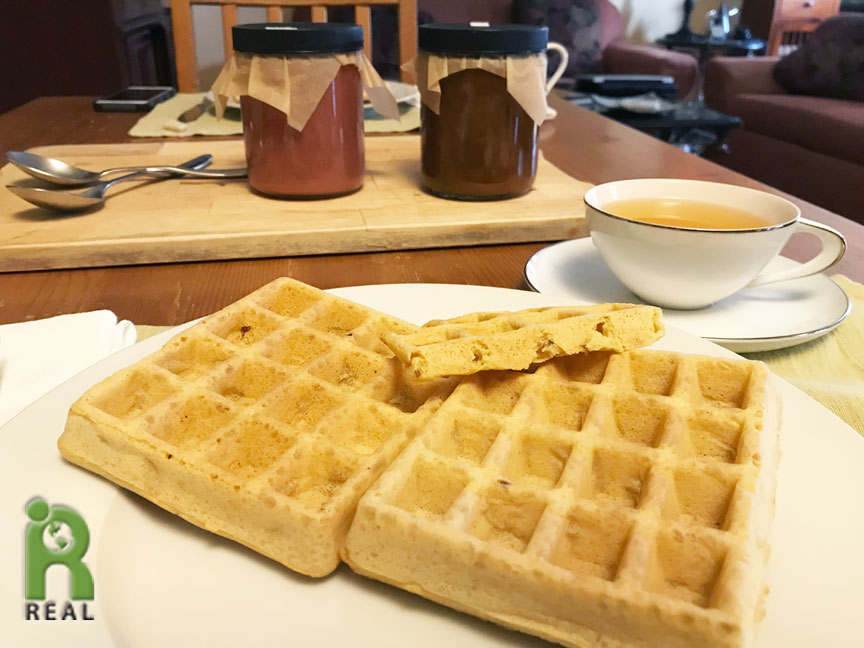 Lunch: We headed north towards New Paltz and drove past some properties we wanted to check out. Afterwards we stopped at Lagusta’s Lucious Commissary. I had interviewed Lagusta about five years ago about her vegan chocolates and thought it would be fun to try her restaurant. We began with an herbal chicory-based Coffee with house-made Cashew Milk. I ordered the Socialist Sliding Scale Soup where you can pay any price you want for it. We paid the suggested price. 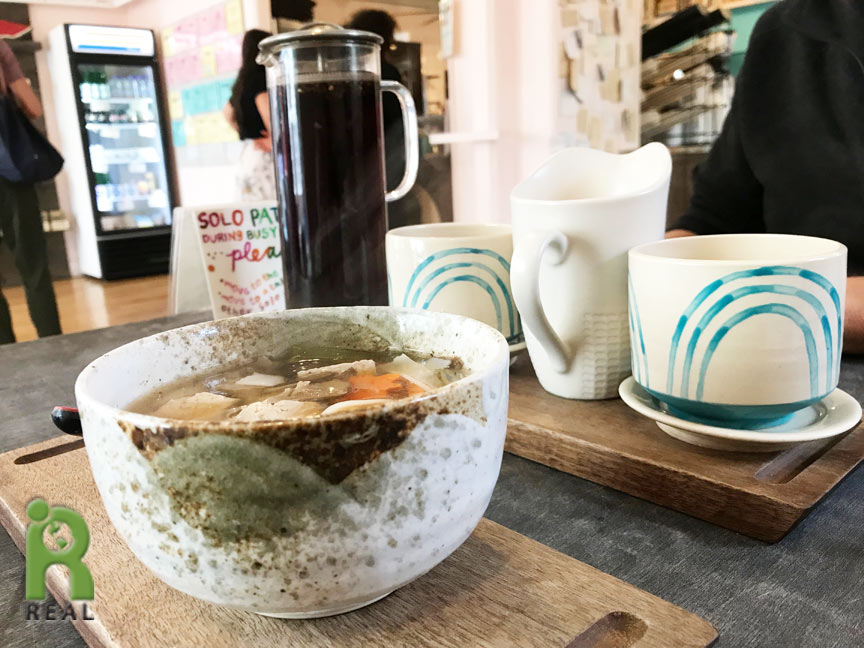 We got a serving of the Beans and Greens which is topped with grated Cashew Cheese. 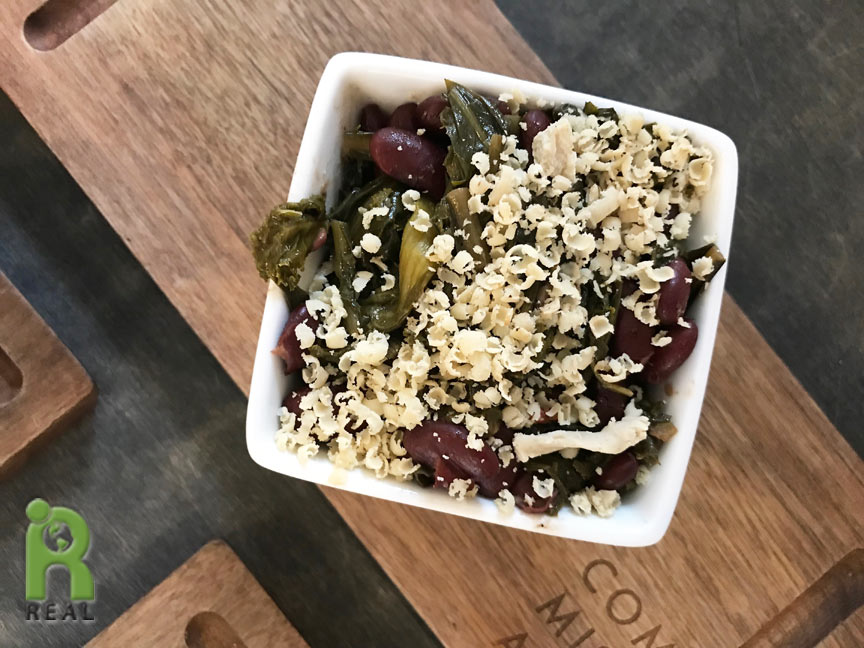 The Cheese Platter came with two vegan cheeses, one from Treeline and Riverdel’s Lemon Black Pepper. 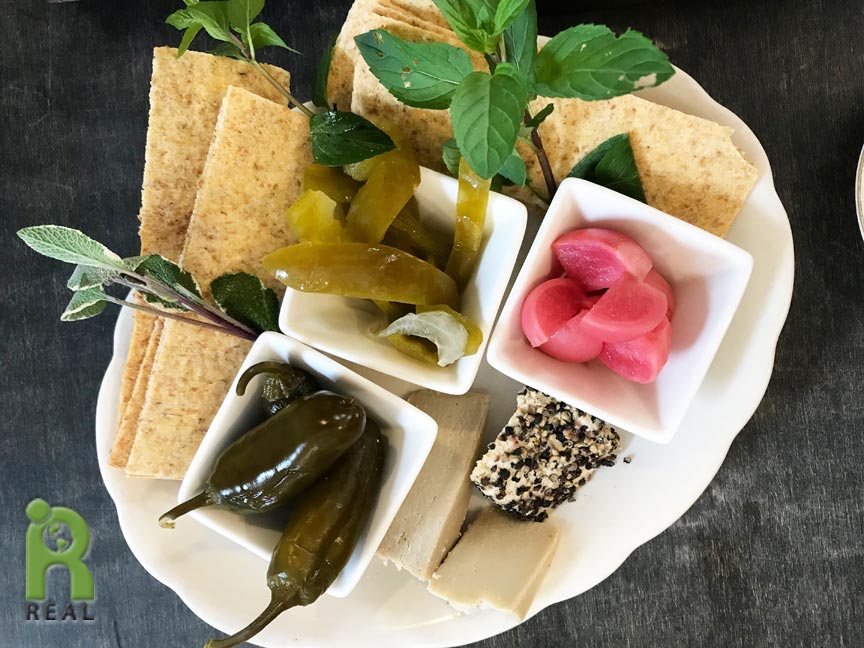 Everything looked lovely, served on wooden platters with different shaped plates. But the food was disappointing. The Beans and Greens tasted like it had been cooking for days. My soup was good and the herbal coffee was nice.

Dinner: After our brief tour of New Paltz we heading back south and stopped at my brother’s house. We went out with him, my sister-in-law Jennifer, and my niece and nephew to a new favorite restaurant of theirs called Thai Golden. It’s a great place to go because they are very accommodating when it comes to vegan, vegetarian and gluten-free needs. I had the Eggplant Stir-Fry. 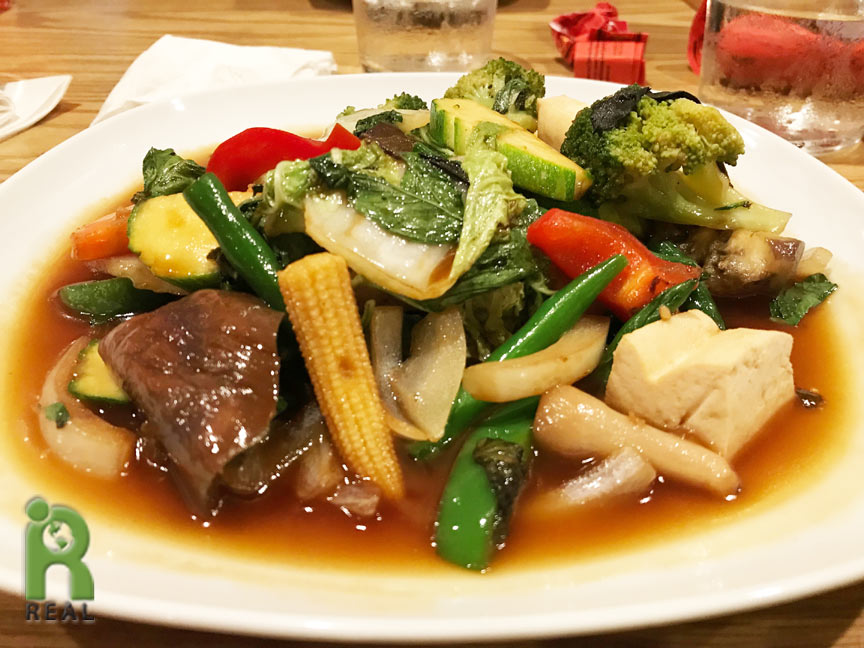 I was thinking about the Spicy Cauliflower Thai Tacos, but my brother got them instead, so I got a taste and they were tasty! 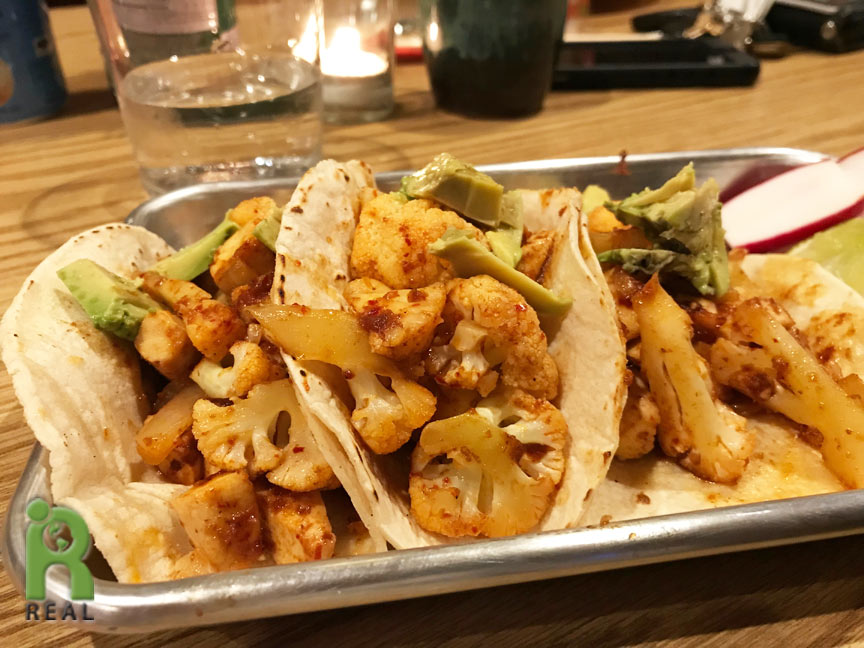 Gary and Jennifer chose the Yellow Curry. It was very flavorful but seemed a too heavy for what I was in the mood for. 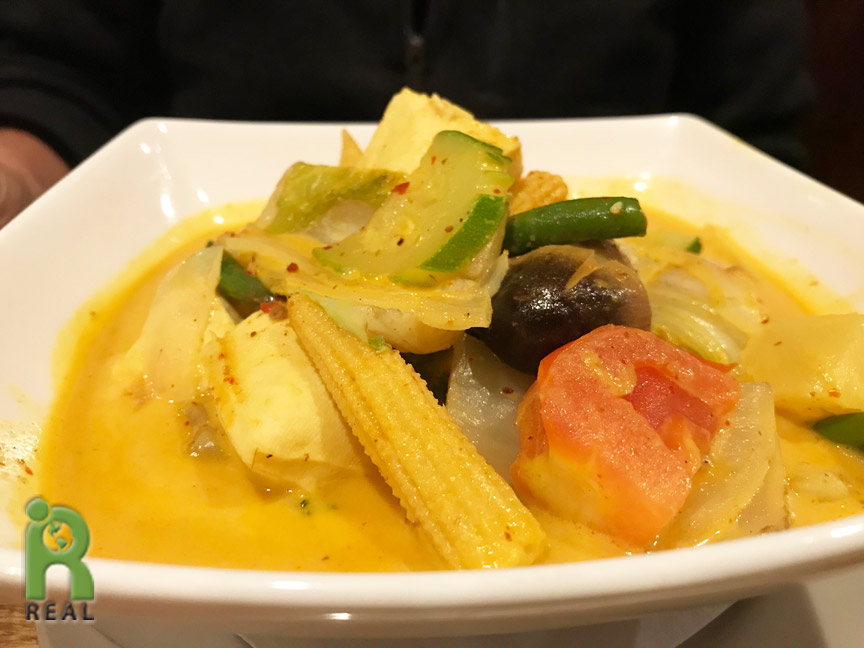 Everyone was raving about the Raw, Vegan, Gluten-free desserts and we had to TRY SOME. TRY SOME is the name of one of them and my brother loved making a million puns about it. Guess which one he had? Try Some! I took a taste and it was perfection. I will have to TRY to make SOME soon. 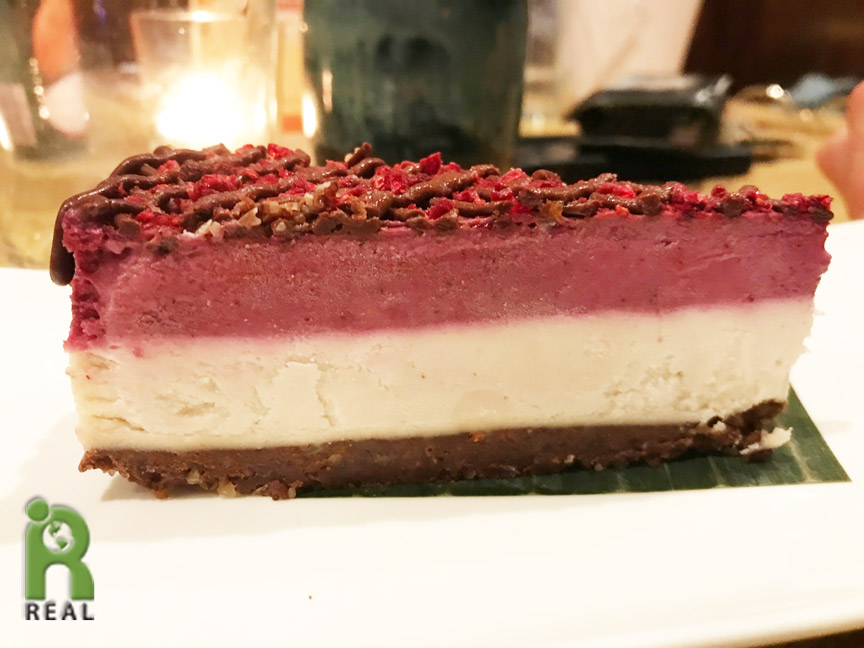 I chose the Matcha Green Pie. It was just as I expected, not too sweet with the unmistakable Matcha flavor. 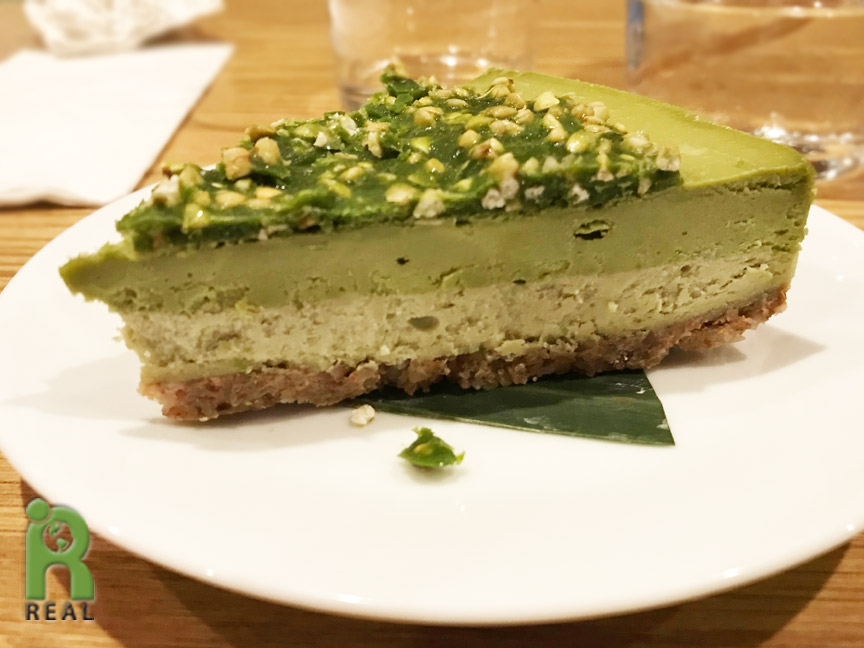 My niece and nephew wanted the Mango pie but there was only one left and my niece got it. My nephew was good about it, getting to taste everyone else’s pies. 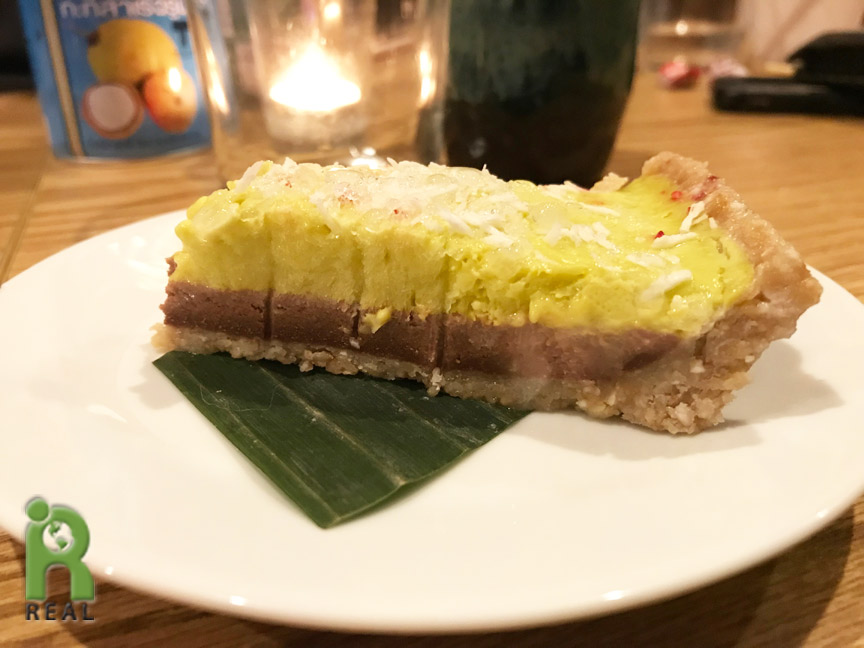