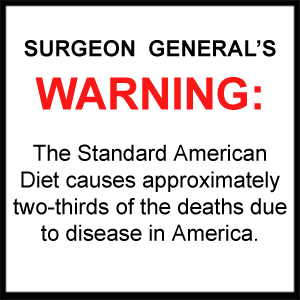 SAD is the acronym for Standard American Diet and it is sad indeed. The health of Americans is degrading quickly with some predicting that today’s generation of children will not live as long as their parents.  Our diet is killing us and the planet – with animal agriculture warming the atmosphere and degrading the environment faster than you can say “Do you want fries with that?” A diet of organic, whole, unrefined fruits, vegetables, legumes, grains, nuts and seeds is the answer to health, longevity, and mitigation of environmental destruction. Books, cookbooks, documentaries and websites keep popping up to spread the news about the power of a plant-based diet. Yet every time I read an article or hear a program about vegan diets there is always a warning.

Take, for example, today’s Los Angeles Times Blog, BOOSTER SHOTS: Oddities, musings and news from the health world where the subject was ‘Bill Clinton talks about being a vegan’ by Eryn Brown. Bill Clinton will be interviewed by Sanjay Gupta on CNN this Sunday.  The article discusses Bill Clinton’s success story on a vegan diet, losing weight.  But that was not enough.  Los Angeles Times had to get in the following – “Vegan diets aren’t always healthy.  As Los Angeles Times reporter Jeannine Stein found last year when she peeked in the pantry of one vegan couple, cutting out meat and dairy can leave a lot of room for nutrient-poor choices like potato chips and Taco Bell burritos. ”

How many pantries did Ms. Stein have to peek in to find a vegan couple that had potato chips and Taco Bell burritos? Cutting out meat and dairy for most vegans creates room for more fruits, vegetables, grains and beans. And did Ms. Stein peek into the pantries of any average American omnivore couples? The top ten items sold at grocery stores, (2008-2009 data) were Carbonated Beverages, Milk, Fresh Bread & Rolls, Beer/Ale/Hard Cider, Salty Snacks, Natural Cheese, Frozen Dinners/Entrees, Cold Cereal, Wine, Cigarettes. We know vegans are not the only ones eating potato chips and Taco Bell burritos. We also know that vegetarians and vegans have more energy, look younger, live longer and have lower incidence of disease. We are having an epidemic of heart disease, diabetes, obesity and cancer, most of which are caused by the Standard American Diet and reporters have to give vegan diets a warning label?

The Standard American Diet needs a giant warning label – milk, meat and refined foods can significantly increase your risk of heart disease, cancer, diabetes and other chronic diseases, causing early death. Yes, you need to supplement a diet of organic, whole plant-foods with vitamin B12 and possibly some other nutrients like zinc, but most omnivores need these supplements as well in addition to many others to make up for their nutrient-poor regimen. The Standard American Diet leaves you fat, sick and tired, requiring a long list of expensive medications just to keep you going.

So my message to all the newspapers, health and fitness magazines, blogs, television and radio stations is this – get REAL and get with the times. It’s time to say that the Standard American Diet is never healthy: dairy products significantly increase the risk of breast, prostate and ovarian cancers; cholesterol and saturated fat from meat, chicken and fish clog arteries and cause heart disease; and refined snack foods are empty calories that leave little room for immune system-boosting, healthy life-supporting, nutrient-rich foods. It’s time to give the plant-based diet the positive media attention it deserves without threatening warnings and disclaimers. You just might make this world a better place.